Pittsburgh Ballet Theatre opens its 2015-2016 Season with trailblazing works by iconic choreographers. See three works with one ticket, and explore the bold physicality and imagination of ballet. 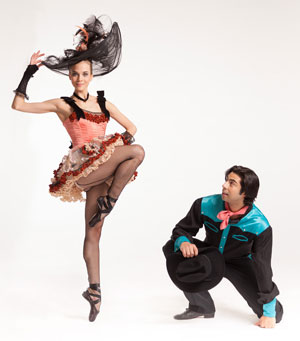 The Movement: Western Symphony features classical technique with a western twang.
Whether it’s a swing to the steps or a corps-wide square dance, look for playful twists on classic vocabulary.

In the Words of the Artist: “I have crossed the United States by car…have camped in the open air …The vast sweep of the land, the impression of the Rockies and the plains, on foot and on horseback, cannot fail to move any newcomer…”  – George Balanchine

From the Critics: “The classical movements capture the zip of a barn dance, the showoff tactics of cowboys, the high-kicking antics of saloon girls, the teasingly elusive activities of a coquette, and the romping zest of young men and women with space to move in and with the gusto to fill that space with aerial displays, brisk steps, and intricate designs.” – Critic Walter Terry, 1954

Claim to Fame: Referred to as the father of American ballet, George Balanchine was one of the most prolific choreographers of the 20th century. His signature neoclassical style lives on through more than 400 works found in the repertoires of the world’s major ballet companies. 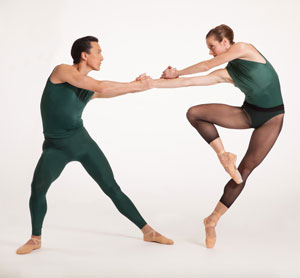 IN THE MIDDLE, SOMEWHAT ELEVATED

The Mood: Driven by the pulse of electronic music, the mood turns futuristic for William Forsythe’s electrifying “In the Middle Somewhat Elevated.”

The Movement: For this thrilling tour de force,Forsythe said he was “making use of academic virtuosity, it extends and accelerates these traditional figures of classical ballet.”

Trivia:  Forsythe works are performed by virtually every major ballet company in the world.

In the Words of the Artist: “The whole atmosphere there was electric,” Forsythe said of the work’s premiere in 1987. “Nureyev had an idea about excellence and he imposed that idea. That generation was one of the finest to come out of the company.”

From the Critics:“The work that changed ballet forever…It was thrilling, a high-voltage shock to the world of ballet…It wasn’t the first ballet that Forsythe had made for Paris Opera Ballet at the request of its then director Rudolf Nureyev… But In the Middle was the one that illuminated everything around it, that made its creator and dancers international names to be reckoned with. The first cast included (Sylvie) Guillem, Laurent Hilaire, Isabelle Guérin and Manuel Legris, the stunning generation that Nureyev plucked from the corps de ballet and turned into stars.”
– The Guardian

Claim to Fame: One of the world’s foremost current choreographers, William Forsythe is renowned for his groundbreaking ballets and experimental approach to choreography. He led the Frankfurt Ballet to prominence before forming his own Forsythe Company. He was appointed this year as associate choreographer of Paris Opera Ballet and currently serves as a professor of Dance and artistic advisor for the Choreographic Institute at the University of Southern California Gloria Kaufman School of Dance. 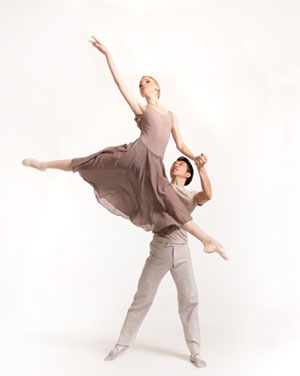 The Mood: The program ends on a poetic note with Jiří Kylián’s exultant Sinfonietta, a stirring ode to the vitality of the human spirit.

The Movement: A work in five movements, Sinfonietta is a sweeping ensemble ballet featuring signature double duets and bold, evocative movement that evokes the spirit of the “modern, free Czech.”

From the Critics:  “The sound of trumpets resounds in the air and a green field and blue sky beckon. Exhilaratingly, a flock of figures is released into space. These are, in fact, male dancers leaping on stage and they gallop in circles like wild horses. This dynamic image is the key to Jiřί Kylián’s exultant choreographic style in Sinfonietta,” – Anna Kisselgoff, New York Times (‘90s)

In the Words of the Artist:  “The audience (present for the U.S. premiere in 1978) was unable to hear the last “Fanfare” of the music, because they already stood on top of their chairs, cheering and throwing their program books into the air.”  – Jiřί Kylián

Claim to Fame: Like Forsythe, Czech choreographer Jiří Kylián is regarded as one of the greatest living choreographers. Kylián served as Nederlands Dans Theater artistic director for more than 20 years and continues to choreograph for the company today. His body of work spans 92 creations for companies around the world.