by Alexandra Kochis, PBT principal dancer
“Life in the Grid.” That’s what Tina Feyland, the repetiteur for Mark Morris, jokingly called it when we initially started working ‘Sandpaper Ballet’ just about a year ago. A grid – 5×5, 25 dancers – moving, morphing, dispersing and coalescing. At one minute humming like a finely tuned machine only to dissolve into chaos the next – Individuals becoming a Whole.
The experience of rehearsing and taking this ballet on the road with my fellow company members to the Chicago Dancing Festival has brought into focus for me an idea of community and an individual’s place with in it in much the same way the choreography of Morris’ piece continually brings it into focus for the audience.
‘Sandpaper Ballet’ requires concentration. And some pretty keen peripheral vision in order to both perform the steps and maintain the rigid structure of the Grid. But, the combined frequency that results from all these individual brain waves synching together is a metaphor that is strongly tangible as a performer in it.
The tour begins. We converge at the airport gate. We are briefly leaving our individual lives to share this slice of our company with the audiences of Chicago in the culminating evening of a dance festival filled with heavy hitters of the industry. We arrive and are neatly packaged into our airplane Grid – rows and seats, number and letter. 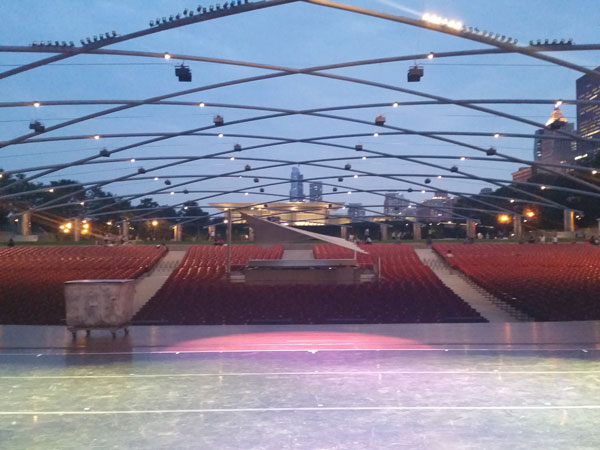 We are scheduled for a post-sunset blocking of our piece for lighting purposes at the Pritzker Pavilion in Millennium Park. I had read a bit about the Park and it’s mission to make modern art and cutting-edge architecture accessible to the public. The Frank Gehry-designed Pritzker Pavilion was reportedly one of its jewels. As I round the granite block of the facade, I am not at all prepared for the beauty and whimsy that await me on the other side. In the gloaming of the humid evening the curved, asymmetric aluminum panels that frame the stage glow with a latent, burnished metallic intensity. The arcing beams crisscrossing the seating section and fanning out into the lawn beyond are intermittently lit with bulbs that wink and twinkle in the twilight. It seems
as if we could be witnessing the momentary touchdown of some otherworldly vessel rather than a stationary structure.
The following day the dancers are scheduled for a warm up class on stage, a run-through of the performance and the show. It strikes me again how this theme of community is unfolding. There are both initial introductions and reunions with old colleagues as the companies take up residence backstage. The paths of our many careers coming together and shooting apart – interlacing the dance world, much like the myriad of beams spanning the seating section of the stage on which we are performing.
At 7:30 p.m. the show is upon us. There is a sizable crowd gathered despite a damp forecast that, at first, merely flirts with precipitating but then resolves to dissolve into a rather steady shower. The estimates are between 3-5,000 in attendance. Their enthusiasm is undeterred. The program opens with a bang. A collaboration between three local Chicago troupes each demonstrating a different rhythmic discipline (flamenco, Irish dancing and tap) and ending with all three dancing together in a thrilling finale. Individuals becoming the Whole. The audience went wild with appreciation. The MC announces, in a voice that competes with the best ringside barkers in the business, “And now, making their Chicago debut, The Pittsburgh Ballet Theatre performing Mark Morris’ ‘Sandpaper Ballet’!” The overture begins and we take our places in the
wings, excited smiles glowing across the stage. We prepare to file into The Grid.
The piece takes on its life – each vignette flowing smoothly into the next. Groups deposit duets to tell their story and solos are assimilated into flocks of dancers. After a particularly deathdefying section in which two diagonals of dancers, hurtling through space, facing forwards then backwards then forwards again, delicately thread the needle with a crossing at center stage so closely timed that it often elicits flinches from on lookers, the audience erupts with applause. The energy emanating from The Grid intensifies. 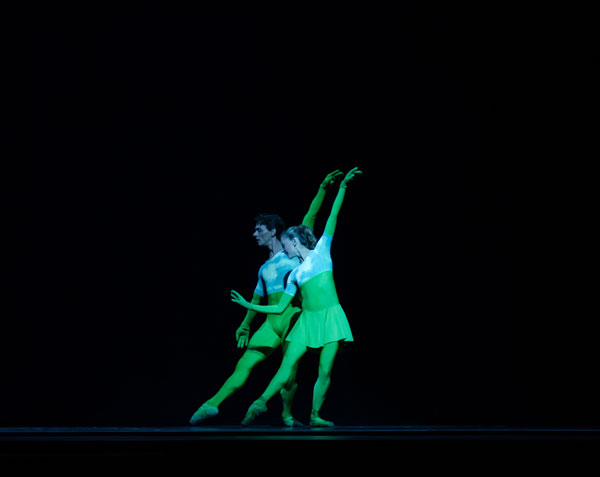 After the conclusion of our piece, we change quickly so we can watch the rest of the show from a video monitor that has been set up backstage. The feeling within the company is one of satisfaction. I sit down on a set of mini risers with a view of the monitor. The pieces featured on the program cover a vast range of styles but the evening seems united by the simple joy of artists coming together and moving to music – sharing their passion for their carefully honed craft with an audience equally as eager to be swept along. As the program continues and more groups finish their performances, people filter in and find a seat with a view, supportively applauding each company as they come off the stage and head for the dressing rooms. By the time the closing act, The Joffrey Ballet of Chicago, is onstage, the backstage anti room is littered with dancers. All eyes are transfixed on the monitor – each of us occupying our own place in this impromptu Grid of individuals from across the country. We have become a community.
Banner photo by: Rich Sofranko
Tour photos by: Aimee DiAndrea
Sub-title
Principal Alexandra Kochis Reflects on Chicago Tour