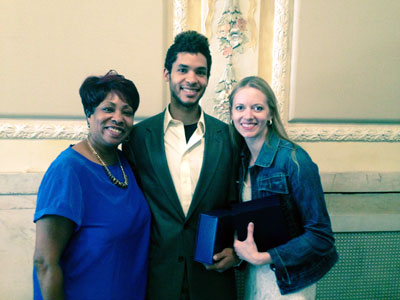 PBT Principal dancer Julia Erickson has been named the female recipient of the 2014 BRAZZY Award. The award was founded in 2013 by Greer Reed, artistic director of Reed Dance, to pay homage to Ms. Leslie Anderson Braswell’s dance legacy and her lifelong dedication to the art form. The award is given out annually to one exceptional male and female in the field of dance.

Leslie Anderson Braswell began her journey with dance at age 12 when she joined the children’s cast of Pittsburgh Ballet Theatre in 1969, and while her professional experiences have spanned performances in Germany, Switzerland and New York City, Anderson eventually returned to her Pittsburgh roots where she received accolades such as the Outstanding Distinguished Teacher Award, Outstanding Woman of America in 1982, and Outstanding Artist Award. Erickson – and her fellow award winner Alan Obuzor – share the Pittsburgh Ballet Theatre connection with Ms. Braswell. Obuzor, artistic director for Texture Contemporary Ballet, also danced  with PBT for seven years before founding Texutre.

“I’m paying honor to my mentor,” said award founder Greer Reed, who was first inspired by Braswell to make a career out of dance. “She’s so passionate about her craft and passionate about people. Every time I see her teach I’m still inspired by her passion and her drive and her dedication.”

About the award winners Reed said, “When they step onto the stage, there’s this magic that happens. It’s that indescribable passion and drive. The spirit of who they are comes alive when they’re onstage.”