Ballet is art, but it’s also intensely athletic – requiring a level of speed, strength and precision on par with any sport.

Growing up in Ohio, Parr played football from fifth grade through high school graduation as a member of the Wooster High School Generals. He started on the offensive and defensive lines early on but, with a boost from ballet, had picked up speed and agility by high school.

“As I got faster and more trim, I eventually moved to linebacker and running back,” Parr said.

And he also became more and more serious about ballet, a discipline that has helped pro athletes, like Lynn Swann, better their on-field balance, control and agility.

For Parr, it became his life’s work. He’s been dancing professionally in the PBT Corps de Ballet for nearly 10 years.

Here, he shares how both his career choice and his first love ultimately improved his performance (and his touchdown dance).

What motivated you to get involved?

“I’ve always loved watching it on TV and played pickup games whenever I could growing up.”

When did you begin dancing and what motivated you to give it a try?

“My mom put me in ballet class when I was little, and I did it for a few years, but I didn’t really love it.  After that, I told her I just wanted to play sports.  I started ballet again when I was 15 and basically had to start over from scratch.  I pretty much forgot EVERYTHING.

A friend of mine was a dancer and heard through the grapevine that I had danced when I was younger.  She told me they had no guys at their studio and she convinced me to try a class, adding that I would be in a room full of girls.”

What hooked you about ballet?

“When I started back again, I liked the challenge and felt like, if I kept at it, it would help me improve with football. The old “Lynn Swann played football” that I heard before was reason enough.  But then I came to PBT for the summer and I saw guys like Daisuke Takeuchi and Alan Obuzor do amazing things in the studio and I said, “That’s what I want I do.”

What about with football?

“I just loved everything about it…the sounds from shoulder pads hitting each other, working together with teammates, motivating and pushing each other to be better.  All the grass stains, bumps, bruises, game days, and the physical challenges are memories I will carry with me forever.”

What kind of crossover did you notice between ballet and football?
“Pretty much every exercise we do in ballet helped me for football.  All the balancing at barre kept me upright on the field.  Quick movements at the barre and during petite allegro made me much lighter on my feet, allowing me to be more elusive.  Having to do big jumps (and landing them safely) gave me a better understanding and awareness of body control.

Proper technique is also key in both.  Just as you can hurt yourself if you’re not tackling properly; one can injure themselves if they’re not landing big jumps correctly or even by doing plies the wrong way. The communication between a quarterback and receiver can be similar to a guy and girl partnering in ballet.  If a quarterback expects a receiver to run a post route and the receiver runs a curl route, there could be an interception.  If two dancers aren’t on the same page while doing partnered  turns or lifts, the movements won’t work.”

Do you think there are cross training benefits for student athletes? Do you think football in any way influenced the way you cross train for dance?
“I think cross training is extremely important.  You can find different ways to push your body and strengthen different muscles that you may not be working during your regular sport or activity.  We lifted weights regularly during the season and off season so football gave me a good foundation and understanding of how to cross train.” 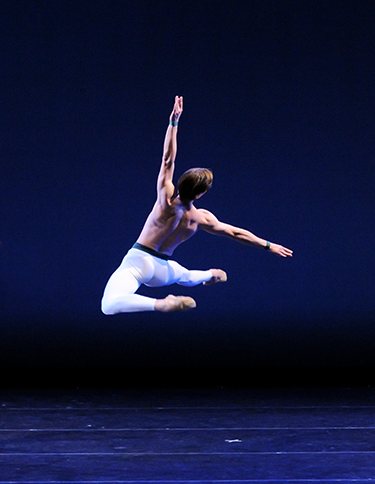 Can you speak to the strength, endurance and overall athleticism necessary to your art form?
“I can definitely recall one time a repetiteur asking me how I was feeling and I casually responded that I was OK but a little sore. After that they jokingly said, ‘Sore?! Of course you’re sore!  You’re a ballet dancer, you’re supposed to be sore every day of your life!’ That about sums it up.  Every day, we are pushing and testing the limits of our bodies to become better technicians and artists.  We have to possess the strength to do big jumps and the endurance to execute them when we’re tired.  All the while doing that with a smile on our face that says, ‘This is a breeze. ‘ I’m so amazed at how strong the ladies are in the corps when they have a long dance, go hold a position on the side of the stage for several minutes, and then break away from the position and go dance some more.  It looks so effortless but there is no way that’s easy!”

How do you cross train now?
“I like to lift weights, do exercises on a therapy ball, different types of push ups and pull ups, planks and hop on an elliptical every now and then.  I try to have my most intense workouts during the off-season so I have more time to recover while preparing my body for the rigors of the season ahead.”

What advice would you give other aspiring male dancers, especially in their early training years?
“The best advice I can give is what I call the three S’s. Show up, suck it up, and shut up. You only get better at ballet by doing more ballet. Ballet can be incredibly rewarding one second and then one second later you feel terrible about yourself. It happens to everyone so you have to suck it up.  For the last S, you have to be respectful and listen to your teachers.  They know what they’re saying and only want to see you be the best you can be.”

With the NFL recently relaxing the rules on touchdown dances, we need to know what yours would be.
“I didn’t score a touchdown until after I started dancing and I totally did a tour jeté.  I’m pretty sure nobody had any idea what that was, but it felt good for me! Now that I’m a little more experienced, I might have to hit ’em with a double saut de basque.  I’m also a big fan of the classic: spin the ball and then pretend it’s a roaring fire to warm up my hands… Not sure if that’s the exact title.”