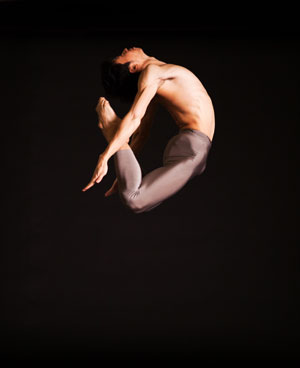 Mix it up this Father’s Day! Give dad an occasion to wear all the neckties of Father’s Days past at a Pittsburgh Ballet Theatre production. There’s nothing wrong with sports tickets, but there’s more to masculinity. If he isn’t already, the athleticism required to make lifts, leaps and turns appear effortless might just make him a newfound fan. Opening in October with The Sleeping Beauty, PBT’s 45th Anniversary Season offers options for any type of man.  After all, ballet dancers are as much athletes as artists, and dad is sure to appreciate the strength, discipline and depth of PBT’s 45th Anniversary lineup! Choose a selection of dad’s favorites, and create a season ticket package tailored to his tastes! He’ll enjoy prime seating and VIP exclusives all season long.

The Sleeping Beauty is for dads who like a little romance. It’s the classic story of good conquering evil and a princely kiss saving the day. Most impressively, the ballet features nearly three hours of continuous dancing, and the principal role of Princess Aurora ranks among the most physically challenging female roles in ballet, requiring great strength and precision. Dad will stand up and cheer for the famous Rose Adagio scene, which is famously virtuosoic.

The Nutcracker – For the devoted family man who values tradition

The Nutcracker is one of the most well-known ballets of all time, and if dad values tradition, this production is for him. This heartwarming coming of age story centers around family, love and enchantment with dozens of fun roles such as bumblebees, toy soldiers, and clowns to engage family members of all ages. If that’s not enough entertainment, the Sugarplum Fairy’s endless pirouettes and the acrobatic feats of the Russian and Arabian divertissements will amaze any dad.

If Dad is on the rugged side, take him to see PBT’s premiere of the new full-length ballet, Beauty and The Beast. It’s the tale of a curse and the transformative power of love. Dad is sure to appreciate this timeless story about the inner beauty beneath a rough exterior. The physicality of Beauty and The Beast will impress even the staunchest sports fan along with the illustrative choreography and stunning set design.

PBT Premieres – For the Multi-faceted Man and Ultimate Athlete

If Dad has serious depth and an appreciation for the athletic, take him to see PBT Premieres, which features masterworks by three inventive choreographers. Petite Mort, choreographed by Jiří Kylián, highlights the dancers’ athleticism and agility, while Jerome Robbins’ The Concert is perfect for Dads who enjoy a good comedy. Finally, Mark Morris’ Sandpaper Ballet is a playful display of wit and musicality.  Plus, dad will be among the first Pittsburgh audiences to experience all three!

La Bayadère – For the Adventurous Dad

Whether Dad is a dedicated jetsetter or an adventure seeker, take him to see PBT’s production of La Bayadère. The epic story takes place in imperial India of the past, and will win well-traveled dads over with its exotic backdrop and grand-scale drama. The performance is sensational throughout, but the climactic Kingdom of the Shades scene combines synchronization and strength in a way any sports fan can approve of.