This Nutcracker season, Corps de Ballet dancer Caitlin Peabody will take the stage for 24 performances, perform 13 roles and dance through at least seven pairs of pointe shoes. Whether it’s a hard toe for Sugarplum or a soft fit for snowflakes, Caitlin customizes her shoes to fit the choreography of the characters that she’ll portray. 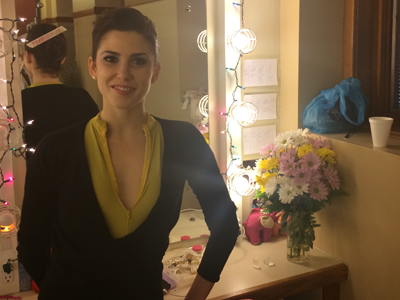 What is your pointe shoe manufacturer and style? Have you changed this at all since you began dancing professionally?
“I wear Freed Classics. My maker is Club. Size 5 1/2x. I’ve always worn Freed Classics. But my makers have shifted a bit here and there. Demand for some can be more than others, and it’s safe to have a backup maker you can wear. In my case I ended up switching to my backup, because I liked it better over time. Once you join a company you can have your shoe customized to your foot. So I’ve altered a bit here and there through the years to create the perfect fit for me. I’ve taken down the amount of fabric on the side, added suede soles, a flat heel. Always trying to make the perfect foot!”

You’re dancing 13 roles throughout the run. What is it like to balance all of these characters?

“I think it’s interesting having all the different roles. It seems to make Nutcracker fly by. I never have a same show. When I was younger, people would ask, ‘What is your Nutcracker day like?’ I’d always reply with “snow, flowers show and snow, flowers show.” That got old. It’s nice to have to think about it, say what my adventurous day will be like and tackle it! I’ve learned to really love some roles, and others I’m OK when I no longer dance them.” 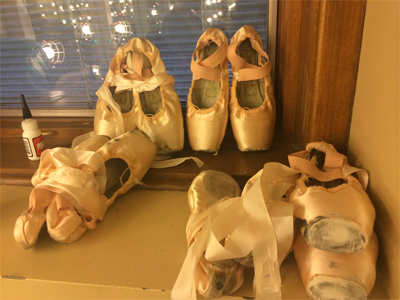 How do you determine which pair of shoes you’ll use for each of your roles?

“For me, if the role is fast-paced, with quick feet movements, I prefer a softer shoe. I know I won’t be fighting the shoe in anyway. I’ll be feeling the floor easily through my shoes, which allows me to move quickly – if the role is more basic pas de deux work. For classical, with many turns, I’ll go for the harder pair. Between having the boy support me somewhat, and being up on my pointe shoe a lot, it’s good to have the extra support. Also a newer shoe will keep you up on your leg very correctly, which is exactly how you need to be for a classical pas de deux.” 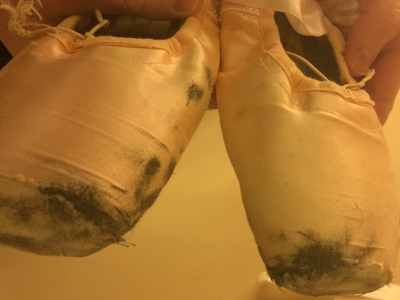 How do you determine when a pair of shoes is “dead”?
“A “dead” pair of shoes simply feels like wearing a ballet flat slipper. You go up, and your big toe feels like it’s sinking into sponge. Complete mush. However at performance time, you could have a pair of shoes that isn’t quite dead but looks horrible with black marks from the floor, or the fabric has torn off. These aren’t pleasing to the eye, so we’ll retire those to maybe rehearsals or just discard them all together.”

How do you typically break in your shoes? Does this differ between roles that you’ll use them for?
“I always break my shoes the same – bend them in half till I hear the pop of the shank, flatten the box all the way, bend it in the other direction after the pop. Some girls think I’m crazy, and maybe I am. But I like soft shoes for dancing. My feet cramp easily, and my feet have never been my best asset. So I like them to be as ‘bendy’ as they can be.” 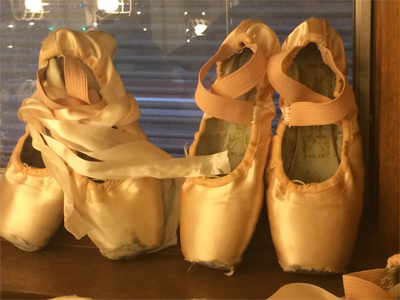 Photos from top to bottom:
-Caitlin Peabody in her dressing room
-A selection of Caitlin’s rotating pairs of pointe shoes
-Pointe shoes used to dance “Arabian,” which left the shoes scuffed from many slides on the black marley covering the stage
-A pair of nearly “dead” shoes (left) comparaed to an almost brand-new pair that she’s prepping for an upcoming Sugar Plum Fairy performance