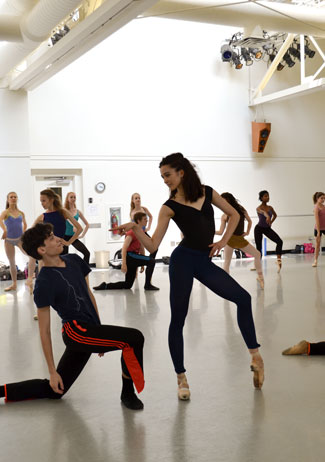 Thirty-eight student dancers, ages 15-23, line up across the studio. They could almost pass as professionals, but then someone laughs into their hand, stifling the sound, and laughter ripples down the line.

“My goal is to make three people cry by the end of this rehearsal,” teases PBT Soloist, Alejandro Diaz. He smiles warmly, but the students still fix their posture and focus. They traveled to Pittsburgh Ballet Theatre from 16 states and four countries for PBT School’s new “Company Experience” workshop, an intensive preview of the life of a professional dancer. For two weeks, the students experience the same rigorous schedule as PBT company members and take instruction from them as well. The workshop culminates in a studio performance.

“If you fall, I’m going to start clapping, be so excited, because it means you’re really trying,” Diaz jokes between run-throughs.

Among the students, Marisa Grywalski, 23, takes center-studio. Before the music starts she jokes with the other dancers, but from the first note she is serious and moves with purpose. Artistic Director Terrence S. Orr peeks into the studio and quietly observes. His eyes, like many of the instructors, are drawn to Grywalski and her command of the choreography.

Grywalski grew up in Columbus, Ohio, but now lives in Forest Hills. She has been studying dance for 17 years, since age 6, and recently finished her third year as a graduate student at PBT School. On an average schedule, Grywalski dances from 9:30 a.m. to 2 p.m., but during the “Company Experience” workshop, she and the other students dance for more than seven hours a day, beginning with technique and continuing with two, three-hour blocks of rehearsal.

“You really have to work your butt off,” Grywalski says of the workshop. “It’s a hardcore preview of what it’s like to be a professional dancer.”

After rehearsing Step Touch for an hour, the instructors call for a ten-minute break. The students pick up conversations, hairspray their buns in the mirror and stretch at the ballet barre. One dancer from Mexico is watching the FIFA World Cup on her phone, and cheers when her home team scores. They talk animatedly to each other, using their hands and expressive faces. It’s as if they’re still dancing – like movement is the best way they know to communicate. A few of them gingerly remove their pointe shoes exposing taped toes, blisters and old calluses.

“They say you can take your pointe shoes off, but I never do,” says Grywalski, who has been dancing on blisters and an in-grown toenail. “I always try to keep them on as long as possible. It strengthens you.”

The only time Grywalski is required to remove her pointe shoes is for PBT Corps de Ballet member Cooper Verona’s rehearsal. His original contemporary piece is performed in flat ballet slippers.

“Cooper’s piece is about finding your own groove,” Grywalski says. “I love classical. It’s why I started. But I definitely found a new love for contemporary. I really love the way Cooper moves and uses the music.”

There are fewer dancers in Verona’s piece than in Step Touch. The rehearsal is more personal.

“You should feel like you’re going to fall,” says Verona to a young dancer and Grywalski’s partner. “If he let you go, you would fall.”

As Verona critiques the dancers in turn, Grywalski practices a difficult sequence of pirouettes in the corner. A photographer from a local newspaper snaps pictures, only a few feet away from her, but she doesn’t notice. Like most of the students, she seems immune to the clicking camera. Her stoicism lasts throughout rehearsal, but during break she returns to her friends.

Grywalski thinks the relationships the dancers have with each other might surprise people. “The process of bonding, especially with your partner, is so physical, and you create these amazing relationships,” she says, and continues with a laugh, “We are also extremely ridiculous a lot of the time. We work hard and we laugh really hard, and that’s why it’s so rewarding when we perform on stage together.”

In total, the in-studio performance at the end of the workshop features nine pieces. Grywalski dances in Swan Lake, Raymonda, Step Touch, and Verona’s original piece. She is partial to the classical pieces, saying Swan Lake is familiar and “feels good,” and describing Raymonda as, “regal”, “pure” and “meaty”.

In addition to the classics, the workshop also gives Grywalski the chance to practice contemporary ballet.

“In classical ballets I’m not type-casted as the springy-happy one,” Grywalski said. “I’m kind of always the sad one. It’s nice to do contemporary where it’s not always sad and depressing, but… very sharp, kind of comical, and a little funky.”

On the day of the final production, parents crowd PBT’s lobby comparing the number of years and hours their children have trained. When the studio doors open, families fill two rows of chairs assembled in front of the mirror. Some parents lean down to the toddlers in their lap and point out big brothers and sisters.

“Maybe you’ll be a ballerina too one day,” says one mother, and her little girl in pigtails flips her head and smiles like she’d like nothing better.

After Terrence S. Orr addresses the audience, the production begins with classical ballet from Swan Lake, Sleeping Beauty, Giselle and Raymonda. The dancers run on and off, their pointe shoes drumming on the marley floor.

Grywalski often dances in the center, and performs variations from both Swan Lake and Raymonda. She bourrées between the other dancers, arms melting and freezing to match the music. There’s no sign that she’s dancing on two-week’s worth of blisters.

To give the dancers time to breathe, Orr introduces the PBT Company members who set and choreographed the pieces. They each say a few words about the process of teaching such demanding choreography.

“It’s like playing Sudoku,” says Diaz. “And playing chess, and jumping off a cliff at the same time.”

The four original pieces that follow are more modern, including a western-themed piece choreographed by PBT Principal Julia Erickson, as well as Verona’s piece, which displays a range in motion from hunched and shuffling to stretching and extending.

The final piece is Dwight Rhoden’s Step Touch. All 38 students line up again, boys facing girls, and the Doo Wop music begins. The audience is close enough to see the dancers sweat and hear their heavy breathing, but the performance doesn’t end until the final note and last clap.

“When we’re up there, our job is to make you laugh,” Grywalski says. “To make you smile, to make you cry, and to take you on a journey.”

The two-week journey ends with a final bow, and parents rush to hug their dancers.

“Now you understand how brilliant the artists living in your home are,” Orr said.