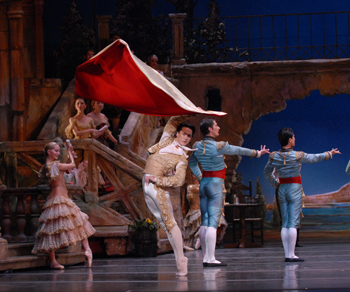 A literary classic turned ballet masterpiece, Don Quixote is a production for the adventurous and imaginative.

The novel Don Quixote de la Mancha by Spanish author Miguel de Cervantes was published in two installments in 1605 and 1615. The story follows the extravagant Spanish nobleman Don Quixote and his sidekick, Sancho Panza, as they bravely set out to revive chivalry. The novel has long been considered a classic because of its comedic approach to themes of courage, idealism and deception.

Light-hearted, funny, and entertaining, Don Quixote has been an audience favorite around the world for more than two centuries. The classic ballet with Spanish flair is widely considered to have some of ballet’s most impressive choreography. The dramatic Grand Pas de Deux in Act II is a stunning display of power, control, and athleticism, and it is among the most technically-demanding sequences in ballet.

Don Quixote was first performed in Vienna in 1740.Several versions existed until choreographer Marius Petipa staged the ballet for the Imperial Bolshoi Theatre in Moscow in 1869. His version was a success. He made revisions to the ballet in 1871, along with a new score composed by Ludwig Minkus, and the result was a timeless classic. The ballet was first performed outside of Russia when Anna Pavlova and a small company went on tour to perform a shortened version of Don Quixote. Its popularity spread as England’s Ballet Rambert performed the ballet in 1962. Don Quixote first came to the United States when Mikhail Baryshnikov staged it for American Ballet Theatre in 1980.

Don Quixote’s breathtaking choreography and entertaining storyline have made it a popular ballet around the world. PBT’s production of Don Quixote with the PBT Orchestra, staged by artistic director Terrence S. Orr, will be performed onstage at the Benedum, April 13-15, to conclude the 2013-2014 Season. Check out the casting here!

Do you recognize any of these 5 famous Don Quixote quotes?
You won’t hear these quotes uttered aloud during this weekend’s performances, but they capture some of the spirit of the characters you’ll see onstage!

“Those thou seest there,” answered his master, “with the long arms, and some have them nearly two leagues long.”

“Look, your worship,” said Sancho; “what we see there are not giants but windmills, and what seem to be their arms are the sails that turned by the wind make the millstone go.”

“It is easy to see,” replied Don Quixote, “that thou art not used to this business of adventures; those are giants; and if thou art afraid, away with thee out of this and betake thyself to prayer while I engage them in ﬁerce and unequal combat.”

3.       “For it is impossible for good or evil to last forever; and hence it follows that the evil having lasted long, the good must be now nigh at hand.” (Don Quixote)

5.       “For now I remember having often heard him saying to himself that he would turn knight-errant and go all over the world in quest of adventures.” (Cide Hamete Benengeli)