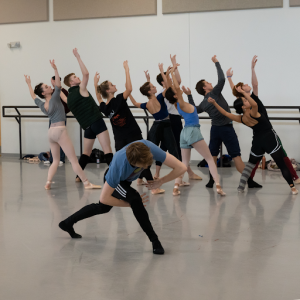 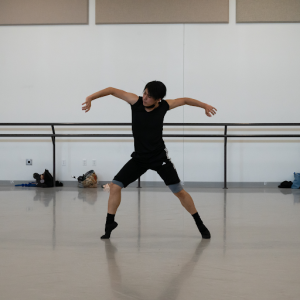 Pittsburgh Ballet Theatre has announced casting for Storytelling in Motion. The 22 – 23 season kicks off with “a taste of the world in Pittsburgh,” highlighting innovative, thought-provoking and athletic works choreographed by Helen Pickett (The Exiled), Nacho Duato (Duende) and PBT’s own Principal Dancer, Yoshiaki Nakano (Catharsis). Storytelling in Motion runs Oct. 7 – 9 at the August Wilson African American Cultural Center!

Pittsburgh Ballet Theatre’s first production of the 2022-2023 season is Storytelling in Motion, a mixed repertoire showcase of contemporary ballet. The production features Helen Pickett’s piece The Exiled, which diverges from traditional ballet in both content and set design.

The Exiled features a large plexiglass room, where three of the five characters are confined during the entirety of the piece. The three incompatible strangers are destined to spend eternity together in the room, while two characters called the Proprietors function as the story’s curators and instigators, creating a cat-and-mouse dynamic. The Proprietors also serve as narrators, diverging from ballet tradition with a spoken performance.

For choreographer Helen Pickett, the unusual set of The Exiled was created to “investigate the concepts of containment: limited space to move and negotiate and the physical responses to the forced confines, which included an actual wall to bump up against,” Pickett explained. “In addition, I wanted to combine the above ideas with the psychological wall/barriers between three strangers who are locked into a one-room space. How do three vastly different individuals cope with each other? How are alliances built, destroyed and accepted?”

Former Artistic Director Susan Jaffe is well acquainted with The Exiled, having seen it during its first ever performance and knew it would be a perfect fit for Storytelling in Motion as she planned the 22-23 season.

“I actually got to see The Exiled in Atlanta, where it premiered,” Jaffe recalled. “I drove eight hours from Winston Salem just to see that work. I was so impressed with it. We did Helen Pickett’s Petal last year during Season Premiere, and now we’re doing The Exiled.”

According to Jaffe, “My interpretation of that plexiglass box is a place where you can’t get out – you are captured in that space. But it’s also transparent, so to me, it’s like being a voyeur. It feels like looking into an apartment building or even looking at a television set. It’s one step removed, but in a way it magnifies what the dancers are doing and what they are saying and makes it unusual enough that you’re hyper focused on the work.”

Pickett echoed Jaffe’s interpretation, stating that, “With this ‘a-day-in-the-life’ story, I wished to set up an even more pronounced voyeuristic aspect for the audience. A transparent wall creates a greater sense that we might be watching something we shouldn’t and it forces questions about the fourth wall barrier as well. On this day of reckoning, we, the audience, are directly asked to participate as witnesses by The Proprietors. We learn that the three other characters, all strangers to each other, are in this space because of their life choices. The Proprietors see their job as a service, and have invited us to join ‘the fun.’ The antics ensue and eventually the three strangers face their realities.

I put enough people inside the space to make the movement puzzle more challenging. I knew The Proprietors could breach the confines, creating more tension for the confined three. ”

On the intended message of the piece, Pickett commented that, “There is no intended message. It is a study in human nature. These PBT dancers are exceptionally generous in their storytelling, both with their physical and emotional space.”

According to Jaffe, Pickett actually reworked and rewrote part of the script specifically for PBT dancers. Pickett will come to Pittsburgh to teach the piece in person to the company dancers.

“Helen is one of the top female choreographers in the world, and we’re really fortunate to be able to perform her work,” Jaffe remarked.

Pickett reflected that, “I want to thank the extraordinary Sarah Hillmer who contributed greatly to the development and furthering of The Exiled. And I wish to thank Susan Jaffe, who saw the premiere of The Exiled, and the entire PBT organization. We are better together!”

Make sure to see The Exiled, along with two other innovative contemporary pieces — Nacho Duato’s Duende and a new piece choreographed by PBT’s own principal dancer Yoshiaki Nakano — in Storytelling in Motion, running Oct. 7-9 at the August Wilson African American Cultural Center. Check out the preview video here.

Pittsburgh Ballet Theatre’s first production of the 2022-2023 season is Storytelling in Motion, a mixed repertoire showcase of contemporary ballet. Storytelling in Motion features Nacho Duato’s piece Duende, which, like many of Duato’s pieces, was inspired by his relationship with the music (in this case, Claude Debussy’s ethereal score). The music determined and molded Duato’s approach to the choreography.

The result is a transcendental and sculptural performance as movement and sound become one in Duende.

Former Artistic Director Susan Jaffe explained her relationship with Duende’s creator and why she chose to include his work when she was planning the 22-23 season: “Nacho Duato is one of the foremost choreographers in the world. Duende was actually supposed to be performed by Pittsburgh Ballet Theatre in 2020, and then the week before the performance, the pandemic hit. The company was fully rehearsed and ready to go, but they never got to perform it. So I said, “My goodness, we have to do Duende for Storytelling in Motion!”

Jaffe described the piece as “gorgeous, sculptural and whimsical,” a sentiment echoed by Nacho Duato himself.

“In a playful way, the ballet also investigates the means of expression of the different meanings of the word that gives it its name: having duende could be taken to mean having personal charm or magic in flamenco art; and duendes, depending on whether they were found in children’s stories or in the imagination of superstitious people, would have quite a different character,” Duato explained.

In terms of audience experience, Duato calls for viewers to “surrender themselves to the fantasy world and be transported to a dimension where the ordinary laws of human life lose their power and significance.”

Make sure to see Duende, along with two other innovative contemporary pieces — Helen Pickett’s The Exiled and a new world premiere choreographed by PBT’s own principal dancer Yoshiaki Nakano — at Storytelling in Motion – running Oct. 7-9 at the August Wilson African American Cultural Center!