Musical, inventive and eclectic – PBT’s mixed repertory program 3×3 is all about the dance. “The physicality…it can be infectious,” said Dwight Rhoden, one of the program’s three featured choreographers. Peek behind-the-scenes, and hear from the choreographers and performers in a three-part video series on the ballet.

A world premiere work starts with a blank canvas for creative invention and  – in the case of  choreographer Viktor Plotnikov – with Antonin Dvorak’s sunny String Quartet No. 12 in F Major – “American.” For Plotnikov, contemporary ballet especially exposes the unique variances in each dancer’s movement quality. Through his choreography, he has said that he is “constantly in search” – trying to discover where the “body can go and how much it can do.”

Artistic Director Terrence S. Orr commissioned choreographer Viktor Plotnikov to choreograph an original new work on the company this season featuring a live string quartet. The result will be a PBT world premiere work focused on pure, musically-driven dance. Set to Antonín Dvořák’s “American” String Quartet #12 Op. 96 in F Major, “In Your Eyes” will feature six couples performing an inventive approach to contemporary, ballet-based movement to music that the Kennedy Center describes as “among the sunniest and most endearing creations in the instrumental repertory.” In addition to choreographing the movement itself, Plotnikov collaborated with PBT Costumier Janet Groom Campbell to design original costuming created on-site in the PBT Costume Shop. PBT has previously collaborated with Plotnikov on his 2011 PBT World Premiere, “Shall We Dance,” featuring iconic songs of George and Ira Gershwin, and he has also created original works for the Pre-Professional Division of Pittsburgh Ballet Theatre School.

Vikor Plotnikov was born in Kharkov City, Ukraine, and began his training at the age of 11 at the Kiev-Ukraine School and later the St. Petersburg Ballet Academy. From 1987 to 1990, he was a soloist with Donetsk Ballet Company in the Ukraine. In 1990, he joined Ballet Mississippi as a principal dancer. He appeared as a guest artist with Tulsa Ballet Theatre and Dance Inc., and toured Russia and the U.S. In 1993, he joined Boston Ballet as principal dancer, Plotnikov has created works specifically for Boston Ballet dancers, members of Boston Ballet II, as well as for institutions throughout the Boston region. He also created works for the 2002 International Ballet Competition in Jackson, Mississippi, two one-act ballets, for the Dancer’s Resource Fund  and for the well-received choreographic event Raw Dance in collaboration with Boston Ballet and Boston Center for the Arts. More recently, he has created works for the Bolshoi Ballet workshop, Richmond Ballet and Festival Ballet Providence. After winning the Choreography Prize at the 2005 Helsinki International Ballet Competition, Plotnikov went on to win the Best Choreography Award at the World Ballet Competition and a prize at the International Choreographic Competition in 2007.

PBT Costumier Janet Groom Campbell hand sketches and colors the vibrant lycra costumes – dyed and built in the PBT costume shop – for Plotnikov’s In Your Eyes. Campbell and Plotnikov collaborated to create the costume concepts, which feature bright colors, hand-drawn designs and inventive tutus for the females.

SMOKE ‘N ROSES – Dwight Rhoden – 2007 PBT World Premiere
PBT reprises choreographer Dwight Rhoden’s “Smoke n’ Roses” as part of the “3×3” production at the August Wilson Center. A PBT world premiere work, Artistic Director Terrence S. Orr commissioned choreographer Dwight Rhoden to create a piece in collaboration with Pittsburgh jazz vocalist Etta Cox for the company’s 2006-2007 ballet season. Set to a medley of jazz songs sung by Cox, Rhoden honors the integrity of the music and the mellow, earthy quality of Cox’s voice with expressive movement emulating the emotion in the music. Based in Rhoden’s physical, contemporary ballet style, the choreography mirrors the syncopation and complexity of the music, translating the intricate note patterns of jazz to intricate steps between larger, flowing movements. A frequent guest artist at PBT, Rhoden has choreographed a number of works on PBT dancers, including “Chromatic,” “StrayLifeLushHorn,” “7th Heaven,” “Ave Maria” and “Simon Said.”

Dwight Rhoden is a founding Artistic Director of Complexions Contemporary Ballet, based in New York City. A former principal dancer with the Alvin Ailey American Dance Theater, he has established a remarkably wide-ranging career. “One of the most sought-after choreographers of the day“ (New York Times), he has created more than 80 ballets for his own company, and his work has been featured in television productions from PBS’s “Great Performances” specials to the popular series, “So You Think You Can Dance.” “Dance Magazine” has praised his “new aesthetic in movement, stage, picture, and performance concepts reflecting a post-modern, techno-savvy worldview.” 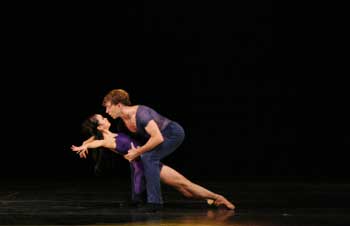 KETUBAH – Julia Adam – 2014 Pittsburgh Premiere
In Ketubah – a 2014 Pittsburgh premiere – choreographer Julia Adam draws from her own heritage to set in motion a series of Jewish marriage customs through a hybrid of ballet, modern and Israeli folk dance accompanied by traditional Klezmer music.

Originally choreographed in 2004 for Houston Ballet, the work follows a couple from their first meeting to their wedding night, depicting traditional rituals including the unveiling of the bride, the ceremony under the chuppah
– the wedding canopy – and the final celebration.  The full work features 16 dancers – 8 women and 8 men – and
makes evocative use of white fabric to depict the mikvah, veil, chuppah and other traditions. The title, “Ketubah,” refers to the marriage contract signed by the bride and groom on their wedding day.

Canadian-born Julia Adam received her early training in her hometown of Ottawa, Ontario, and at age thirteen began studies at the National Ballet School in Toronto, graduating in 1983. She spent the next five years honing her skills at the National Ballet of Canada. In 1988, Julia joined the San Francisco Ballet, where she finished the remainder of her dancing career, gaining prestige as a principal dancer known for her lyricism, musicality and broad theatrical range. After retiring from dancing in 2002, Adam was able to devote more time to her love and talent for choreography. She created her first ballet, The Medium is the Message, in 1993 for San Francisco Ballet’s Choreographic Workshop, drawing much attention for her uncanny wit and unique sense of movement. Since then she has created a number of works for companies, including Marin Ballet, The Bay Area Dance Series, Ballet Met, Alberta Ballet, San Francisco Ballet, Houston Ballet, Oregon Ballet Theater, Atlanta Ballet and Nashville Ballet among others. 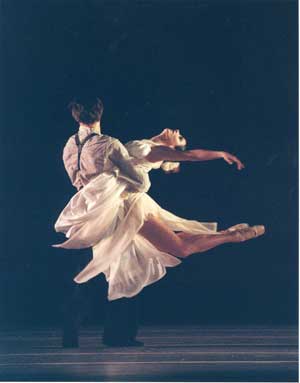