With five scenes, over 150 unique costumes, more than 1,500 accessories and 21 performances, Pittsburgh Ballet Theatre’s (PBT) production of the holiday classic The Nutcracker is no small feat. One unique aspect of The Nutcracker is its amazing costumes, which were designed specifically for the beloved holiday tale.

Janet Groom Campbell, who was PBT’s Costumier for more than 48 years, says that organization is key for the myriad of costumes used in The Nutcracker, and much of that preparation occurs even before performances begin.

“I always said that The Nutcracker is our best friend because we can work on it any time during the season because it is always there,” Campbell remarked.

“We pull all the costumes for each performance from storage, organize everything in the costume shop and make sure everything is performance ready. Then, one Saturday in November, we do all the student fittings and have Kathie Sullivan (PBT’s Wardrobe Supervisor) come in to pack and count everything to be transported to the Benedum Center.”

Kristin McLain, current Costume Director at PBT who has been working with the organization since 2016, noted that, “Pretty much all of November is a scramble to get Nutcracker ready.”

McLain described the annual preparation routine for The Nutcracker as very methodical and precise.

“Year after year, we follow the same plan as the year before,” said McLain.  “During the summer, we pull each group of costumes from the back storage and carefully look through for repairs.”

According to McLain, typically in early November, they’ll have a costume fitting day for the nearly 150 students who are dancing in The Nutcracker.  This is usually a fast-paced, fun day because they get to see all of the kids who will be performing and can make sure that their costumes fit and that they know how to put them on. At the end of November, company casting is released and the costume department can begin fitting the company dancers and graduate students.

“Many of the dancers have worn these costumes in years past; however, we find that we can usually make a few minor adjustments to perfect the fit,” said McLain.  “While we don’t usually have difficult alterations, with so many dancers it can add up.”

After alterations are complete, the costumes must be transported to and organized at the Benedum Center for the Performing Arts.

“When packing, Kathie Sullivan organizes how the crates are packed and where they will go in the theater. Most costumes have at least four accessories,” Campbell explains. 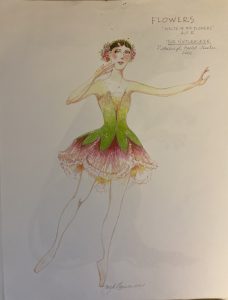 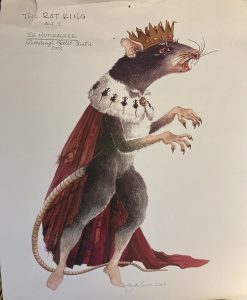 According to McLain, The Nutcracker has the most costumes and dancers that she’s ever worked with and due to the number of people and activity backstage, it MUST stay organized.

“At the theater, Kathie Sullivan and her dressers keep everything in order”, said McLain. “The costumes and dressing areas are located over four floors of the Benedum: the basement dressing rooms, stage level dressing rooms, entry level dressing rooms and rehearsal studios. For a full week before performances, Kathie and her team place costumes, tights, shoes/boots and headpieces into the areas of the corresponding dancers. Between shows, items will return to the wardrobe room for washing and repair and will then be placed back exactly where they belong.”

In addition to the company and graduate student dancers, there are also nearly 150 student dancers involved in the performances. The student costumes include everything from flowers and snowflakes to party children, soldiers, bumblebee, clowns and everything in between.

Although it certainly takes a village to alter, assign and distribute all of the costumes required of The Nutcracker, the effort certainly pays off — the over 150 dazzling, unique costumes bring the magical ballet to life on stage.

Get an up-close look at the details of The Sugar Plum Fairy, Cavaliere and The Nutcracker Prince costumes below. 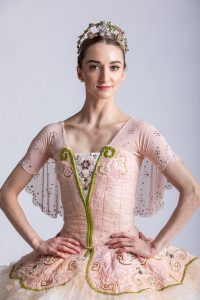 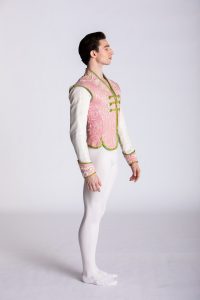 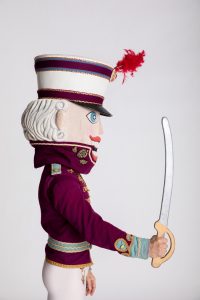 Thank you to our sponsors, Highmark, Giant Eagle, Clearview and Federal Credit Union for their support of The Nutcracker.