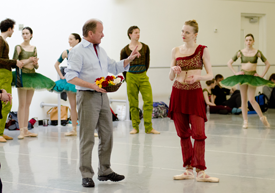 For over a year, Artistic Director Terrence S. Orr has been meditating on his interpretation of the magnificent 19th-century Russian classic, La Bayadère. The ballet is PBT’s largest classical ballet to date. But for Orr, the magic comes down to the details.

Since January, he has spent nearly six hours a day in the studio, finessing nuances in the movement, clarifying the storyline and marking formations for the iconic Kingdom of the Shades scene. He’s also tapped the talents of Ballet Mistress Marianna Tcherkassky, who has added choreography, and principal dancers Christopher Budzynski and Alexandra Kochis, who’ve helped teach choreography and reveal its meaning. Meanwhile, Maestro Charles Barker and PBT pianist Yoland Collin have spent hours poring over the original Ludwig Minkus score to customize it for PBT’s production.

“It’s a ballet only done by really big, well-established companies because of the enormity of the ballet. I find it a real honor that we can put it together,” Orr said.  “There’s a reverence to it.”

This is prime season finale material and a major addition to the PBT repertoire. For Orr, the plot line of La Bayadère hooks him with its complex love quadrangle, intrigue and all-out drama.

“I think La Bayadère is one of the most wonderful of the classical ballets…it has a storyline in many ways comparable to the proportions of a Shakespearean play,” Orr said. “It’s also one of ballet’s great spectacles of technical showmanship—testing the character of a company, requiring all of the dancers to elevate their game, whether they are in the corps, or a soloist or principal dancers.” 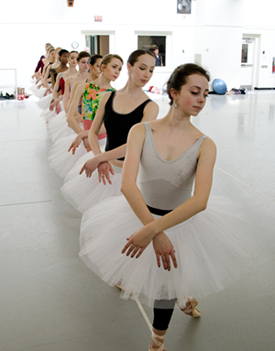 From upstage left, one arabesque initiates one of the most iconic scenes in classical ballet.

This is the “Kingdom of the Shades” – a scene that seems to suspend reality as 24 ballerinas descend on the stage in a hypnotizing series of arabesques. The classical technique is as pristine as the white tutus and gauzy scarves attached to their fingertips. They move and breathe as one. Setting the scene, and executing the first of 38 arabesques, is Corps de Ballet Dancer Michaela King.

“I’m excited but I’m kind of nervous to have that role. When I step out to do that first arabesque I’m kind of setting the tone for that scene,” King said. “I want to be solid and not waver like, ‘Come on, we can do this girls.’”

The effect is sublime, and the rehearsal process behind it meticulous. The music binds the 24 dancers, who King explains must learn to count and hear it as one in order to achieve the synchronization for which the scene is famous.

“It’s all the little details, trying to get our arms to breathe the same and our heads (in position),” she said, adding that covert glances from the corners of their eyes help too. “Rehearsing together five days a week, you slowly start to get a rhythm and sense of timing with the other girls… you can kind of feed off of each other.”

The scene – an otherworldly backdrop to a reunion between lovers Nikiya and Solor – is the Act III culmination of the tumultuous love story.

“When the first girl steps out in her white tutu, a hush almost goes over the audience,” King said. “There’s something so beautiful and almost unreal about seeing this line of beautiful girls all in white steeping out and doing one arabesque after another.” 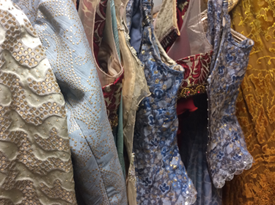 Many of the dancers have been fitting in extra ab work to prepare for the midriff-baring costumes of the temple and high-flying jampé dances.  For Campbell, the real legwork kicked in for the Kingdom of the Shades scene and the white classical tutus worn by the Corps de Ballet and principals.

“There are 28 tutus onstage,” she said. “That was an intense fitting process.” 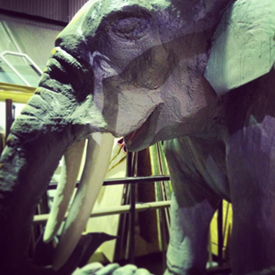 Backstage at the Benedum, the sweeping vistas, opulent palaces and temples of ancient India await the stage. So, too, does a seven-foot elephant, just one of the props that will add texture to the scenic design.

From lighting design to scenery, Production Manager Joe Lumia will oversee the stage’s transformation to a mystical epoch in imperial India. But his oversight must be just as pragmatic as it is creative. Lumia must maximize every minute in the theater, ensuring that the project stays on budget and schedule while meeting Orr’s vision and that of the lighting and scenic designers.

“The colors are vibrant, lush and rich. It’s a little more exotic than the typical ballet,” he said.  “It brings some of the beauty of India in the color and shapes of the architecture.”

Throughout the ballet, the crew will execute five scene changes, including configuration of a 30-foot double ramp from which the ballerinas will descend for the famous Kingdom of the Shades entrance.

“This scene is what makes this ballet so special,” he said.

By the time the crew steps foot in the Benedum, there are five days to curtain and just three until the stage must be dancer-ready for the Wednesday evening tech rehearsal.

“It’s the first time that we really see the show come to life and see everything under the correct lighting,” Lumia said, adding that they have only the Wednesday tech and Thursday dress rehearsals to iron out kinks. “We try to do it without stopping (on Thursday), because the next time we run the show, we have an audience.”

Sub-title
The Making of La Bayadère