Pittsburgh Ballet Theatre’s first production of the 2022-2023 season is Storytelling in Motion, a mixed repertoire showcase of contemporary ballet. The production features Helen Pickett’s piece The Exiled, which diverges from traditional ballet in both content and set design.

The Exiled features a large plexiglass room, where three of the five characters are confined during the entirety of the piece. The three incompatible strangers are destined to spend eternity together in the room, while two characters called the Proprietors function as the story’s curators and instigators, creating a cat-and-mouse dynamic. The Proprietors also serve as narrators, diverging from ballet tradition with a spoken performance.

For choreographer Helen Pickett, the unusual set of The Exiled was created to “investigate the concepts of containment: limited space to move and negotiate and the physical responses to the forced confines, which included an actual wall to bump up against,” Pickett explained. “In addition, I wanted to combine the above ideas with the psychological wall/barriers between three strangers who are locked into a one-room space. How do three vastly different individuals cope with each other? How are alliances built, destroyed and accepted?”

Former Artistic Director Susan Jaffe is well acquainted with The Exiled, having seen it during its first ever performance and knew it would be a perfect fit for Storytelling in Motion as she planned the 22-23 season.

“I actually got to see The Exiled in Atlanta, where it premiered,” Jaffe recalled. “I drove eight hours from Winston Salem just to see that work. I was so impressed with it. We did Helen Pickett’s Petal last year during Season Premiere, and now we’re doing The Exiled.”

According to Jaffe, “My interpretation of that plexiglass box is a place where you can’t get out – you are captured in that space. But it’s also transparent, so to me, it’s like being a voyeur. It feels like looking into an apartment building or even looking at a television set. It’s one step removed, but in a way it magnifies what the dancers are doing and what they are saying and makes it unusual enough that you’re hyper focused on the work.”

Pickett echoed Jaffe’s interpretation, stating that, “With this ‘a-day-in-the-life’ story, I wished to set up an even more pronounced voyeuristic aspect for the audience. A transparent wall creates a greater sense that we might be watching something we shouldn’t and it forces questions about the fourth wall barrier as well. On this day of reckoning, we, the audience, are directly asked to participate as witnesses by The Proprietors. We learn that the three other characters, all strangers to each other, are in this space because of their life choices. The Proprietors see their job as a service, and have invited us to join ‘the fun.’ The antics ensue and eventually the three strangers face their realities.

I put enough people inside the space to make the movement puzzle more challenging. I knew The Proprietors could breach the confines, creating more tension for the confined three. ”

On the intended message of the piece, Pickett commented that, “There is no intended message. It is a study in human nature. These PBT dancers are exceptionally generous in their storytelling, both with their physical and emotional space.”

According to Jaffe, Pickett actually reworked and rewrote part of the script specifically for PBT dancers. Pickett will come to Pittsburgh to teach the piece in person to the company dancers.

“Helen is one of the top female choreographers in the world, and we’re really fortunate to be able to perform her work,” Jaffe remarked.

Pickett reflected that, “I want to thank the extraordinary Sarah Hillmer who contributed greatly to the development and furthering of The Exiled. And I wish to thank Susan Jaffe, who saw the premiere of The Exiled, and the entire PBT organization. We are better together!”

Make sure to see The Exiled, along with two other innovative contemporary pieces — Nacho Duato’s Duende and a new piece choreographed by PBT’s own principal dancer Yoshiaki Nakano — in Storytelling in Motion, running Oct. 7-9 at the August Wilson African American Cultural Center. Check out the preview video here. 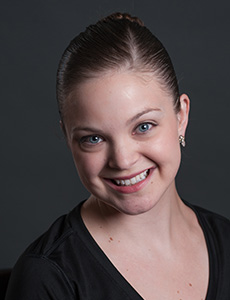 Meet PBT School’s Head of the Children’s Division Kaila Lewis! A Pittsburgh native, Kaila has been teaching with PBT School since 2006, but her history with the School goes all the way back to her early years as a dancer. Kaila trained at PBT School, where she went through the student division, the high school program and the graduate program. Read on to learn about her journey with PBT and her passion for teaching ballet to young children!

What drew you to teaching children?
I was naturally drawn to working with children and I just love how genuine and magical they are.

Can you share why you believe that dancing ballet is rewarding for young children?
I think ballet offers many things that can be carried with someone, even after they have finished dancing. Ballet offers discipline and structure, and eventually students must learn time management. It also can create a lifelong passion and appreciation.

As a graduate of the student division, high school program and the graduate program of PBT School, how have you seen the school progress during your time with PBT?
It has been exciting to watch the school expand over the years. I was also proud to watch how the school adapted and persevered during the pandemic.

How do you stay calm and organized during teaching?
I have always been an organized person and I always carry a notebook and a planner with me. I implement discipline and structure from the very beginning with my students. I work hard to carry those expectations through their primary years, so that it is never an issue.

What is the most rewarding part of teaching?
My favorite thing about my job is that I get to facilitate a child’s love for ballet. I get to create magical experiences that turn ballet into a passion.

However, PBT School student performance opportunities were not just limited to Open Air this year; many graduate students saw the opportunity to perform in Susan Jaffe’s Swan Lake with the PBT Orchestra last May as well as previous productions of The Sleeping Beauty and The Nutcracker.

Three graduate students from the PBT School — Cecilia Hernandez, Gracie Jean Joiner and Jesse Joiner — reflect on the performance opportunities that PBT has offered and what they’ve learned from their experiences onstage.

What is your favorite type of dance you’ve performed?

How was your experience with Open Air this year? What role did you dance?

What has been your favorite performance experience with PBT?

How does dancing alongside company dancers and other students inform your own dancing?

How has your experience performing with PBT helped to shape you as a dancer?
Gracie: I came to PBT with lots of technical knowledge, but absolutely no clue what to do with it. Having so many opportunities to perform with PBT in different locations and styles has helped me to improve both the consistency of my technique and artistry.
Cecilia: Performing with PBT has helped me grow more professional and developed how I present myself on stage. I’m so grateful to have had many performance opportunities to help me experiment with who I am as a dancer.
Jesse: PBT has shaped me into the dancer I am today. I came to PBT four years ago and this is where my technique has been shaped and created. Dancing alongside the company has really helped me learn how to work smart and work hard in class and rehearsal.

Pittsburgh Ballet Theatre (PBT) is pleased to announce that its $6 million Live Music Appeal, which was launched at the start of the organization’s 50th season in 2019, has been achieved. This momentous occasion, which was accomplished under the leadership of outgoing Executive Director Harris Ferris, ensures that the PBT Orchestra will provide live music at PBT performances for the next 50 years and beyond.

“When this important campaign appeal was announced in the fall of 2019 no one could have predicted that within 6 months the season would be closing due to COVID-19,” says Harris Ferris. “I am proud to announce that friends of PBT can rest assured that the current level of orchestral music will continue to be a part of Pittsburgh Ballet Theatre’s annual season.”

“This transformational gift of 50 years’ live music both delivers on our mission of creating extraordinary ballet experiences and ensures organizational sustainability,” says PBT Board Chair Mary McKinney Flaherty. “This would not be possible without Harris’s vision; the financial support of our anonymous donor, leading foundations and numerous individuals; and, of course, the skill and artistry of all of our amazing PBT Orchestra musicians.”

Since 2010, a single individual, who has chosen to remain anonymous, has been instrumental in supporting two to three programs every season with the PBT Orchestra. In support of PBT’s Live Music Appeal, this same individual pledged a $3 million gift to double every donation made to live music since the appeal was launched in October 2019. “We are deeply grateful for the anonymous donor’s support, along with several leading foundations who contributed to this goal, including The Hillman Foundation, Hilda M. Willis Foundation, Heinz Endowments, Audrey Hillman Fisher Foundation and so many other organizations and individuals,” Ferris says.

The announcement of this achievement was formally recognized at PBT’s launch party of Open Air: A Series in Celebration of the Performing Arts on Thursday, June 9. Open Air was hosted this year in a picturesque setting overlooking the beautiful Allegheny River in Sharpsburg, due to the generosity of and partnership with The Mosites Company, which owns the 52-acre property.

Both Open Air and the success of the PBT’s Live Music Appeal come at the end of Harris Ferris’ successful 15 year tenure as executive director of PBT, during which he fostered a harmonious relationship with the PBT Orchestra. The completion of the Live Music Appeal is a remarkable, crowning achievement in Ferris’ legacy at PBT.

“The musicians of the PBT Orchestra are deeply grateful to the donors and patrons of Pittsburgh Ballet Theatre for believing what we have always believed: great ballet deserves great live music. We look forward to being an integral part of PBT every season for many years to come,” says PBT Orchestra Oboist Cynthia Anderson.