PBT fans may have spotted them onstage as pre-professional performers in company performances of The Nutcrackeror Swan Lake, but now Michaela King and Marisa Grywalski have joined the official company roster as the newest females of the corps de ballet. And, stay tuned to learn more about PBT’s newest male dancers! 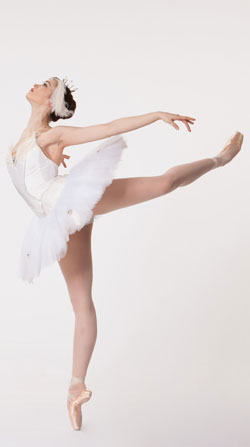 Top-played song on your iPod right now: Marisa doesn’t have an Ipod, but her most recent Pandora station is Queen.

Family: Mom, Dad and two older sisters. One is 9 years older (married with a son) and the other is three years older (lives in New York).

Favorite (non-dance) hobby: Her boyfriend got her started playing the video game Diablo. She says they play for hours. She also goes on lots of walks at Frick Park. “It’s nice to get a little bit of reality.”

Favorite way to relax: “I like to cook an extremely elaborate meal and sit down with a yummy glass of wine and watch a movie.”

Favorite Food: “Every year for my birthday my mom would make eggplant parmesan and I carried on that tradition when I moved away…I like literally everything, which is a little bit dangerous when you’re a ballet dancer.”

Three things you always bring to the studio: Coffee, leg warmers and a tennis ball.

Backstage good luck ritual and preparation: Before Marisa goes on, she stands with the girls she is close with and they kiss each other on the cheek before stepping onstage. She says it’s a group effort.

If Marisa wasn’t a professional ballerina, she would be…. A teacher. “I would want to be somehow involved in people’s lives.”

Describe how you got started in dancing.

“Both my mom and dad were dancers. My mom was the magician’s assistant, who was in the box and disappeared, and they first did a show together with those ridiculous costumes. They moved to Chicago to continue that and had my older sister there. But, they moved to Columbus because it’s more for a family and they had my other sister. They had a little studio together. All three of us danced, so it’s like I grew up in the studio with my mom teaching. We used to get home from school, and I would just watch ballet VHS tapes all night. The same ones over and over and over again. I was a crazy child.”

Describe your “ballet ephiphany” – the moment you need that this would be your future.

“I grew up and I loved it, always, watching the videos. It’s super emotional, and I’m a very emotional person, so I loved to could watch the great legends of then and what they did.

I almost quit after having surgery ( on her foot in 2009), because I was having so much trouble getting back. Once I started to get out of the rut, that was an epiphany moment, like this is what I want to do. That was before I came here, and coming here was like, ‘this is serious. I need to get my act together now.”

Describe one of your most memorable moments onstage.

“I mean, I fell. It was memorable, because I was like, ‘Oh my God, I fell.’ But, the best moments are in studio. I’m one of those people that, I’m more into the process. The most rewarding parts are in rehearsals. Not this past school year but the one before that, I was rehearsing Odette with Terry, and The Nutcracker pas. It was one of the most rewarding times, just being immersed in it.”

Which of PBT’s 2014-15 season productions are you most looking forward to and why?

“They are all really good. This is a really good season. I mean, I’m really excited for The Sleeping Beauty. But it’s not fair to just name one. But, just because it’s female dominant, most classical ballets are female dominant, but this one is really like, all women everywhere in tutus. And, we’re doing (Mark Morris’) Sandpaper Ballet now with repetiteur Tina (Fehlandt), and it’s awesome.”

What is the biggest difference between dancing in the PBT School Graduate Program and dancing as a professional in the Corps de Ballet?

“You’re on your own. There’s a certain point in your last year, or last six months as a student, where your teachers start to, in a way, let you go a little bit, not let you go but let you be on your own. They definitely hone in on certain things you really need to work on, but here you’re on your own. You don’t get corrections you have to figure it out yourself and you have to push yourself. You have to kind of find your place in the classroom, and studio, and rehearsal while feeling respectful of the others and being able to work with them.” 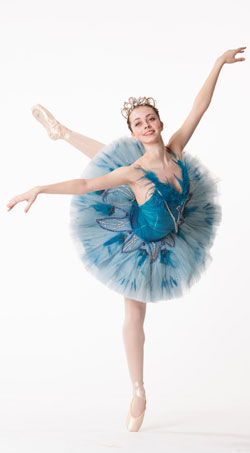 Top-played song on your iPod right now: Anything by Mumford and Sons or Chris and Thomas. “I’m always looking for new artists.”

Years dancing: Michaela started dancing when she was five years old, but didn’t start ballet until she was 10. She went on pointe for the first time at 11. “I just remember being in the kitchen at the counter going on pointe and my mom was like, ‘take those off’, but it’s just so exciting.”

Family: She has two siblings. Younger sister (17) and younger brother (15). Her sister dances as well, as seriously as Michaela but they bond over that and can talk about “girl stuff.”

Hometown: Michaela grew up in Wilmington, North Carolina, 15 minutes away from the beach. She lived there for nine years then moved near Fredericksburg, Virginia. She graduated there and then came to Pittsburgh.

Pets: She doesn’t have pets in Pittsburgh, but at home she has two cats (Mrs. Marbles and Cecil). She’s hoping to start fostering cats here.

Favorite (non-dance) hobby: At home she goes out on her dad’s boat, tubing or knee-boarding. She also likes taking long walks and hiking. “It’s important to have some other outlets after you’re done dancing for the day.”

Favorite way to Relax: Going out and hanging out with friends.

Favorite Food: A cute café for lunch and coffee. “I feel like there are so many good restaurants here in Pittsburgh.”

Three things you always bring to the studio: Water bottle, theraband and a banana

Backstage good luck ritual and preparation:  She tries to warm up properly and mark through some of the choreography and work on problem steps. “I’ll say a little prayer and check my pointe shoe ribbons to make sure they’re tucked in and tied.”

If Michaela wasn’t a professional ballet dancer, she would be…A physical therapist. “I have thought about this, like if I went down the college route what I’d be doing. It’s hard to say for sure, but I’ve always found maybe being a physical therapist. Because I feel I’ve had a lot of injuries, and I’ve been to a lot of PTs. I know that’s a lot of schooling, but If I wasn’t dancing, you know?”

Describe how you got stared in dancing and what inspired you to make it into a career.

“When I was like 11, I saw my first ballet at the Kennedy Center in Washington, D.C., and it was ABT performing La Bayadere. I had always loved dancing and had always enjoyed it, but up until then it had always been for fun. After seeing that, I was just blown away by how magical it is. Watching, it tells a story and takes the audience to another place. Seeing those professionals do what they love I thought, this is what I want to do. So, I started auditioning for summer programs and going down that route.”

Describe one of your most memorable moments onstage.

“This year I got to perform Swan Lake with the company. It was really incredible to be up on stage at the Benedum, and I was in the corps, so just working with all the other girls you have to be completely in sync. All your heads have to be the same, all your arms. It’s all about the little details. But, I feel like when it comes together, there’s something so powerful about that.”

Which of PBT’s 2014-15 season productions are you most looking forward to and why?

“Probably La Bayadere, because it’s the first real professional ballet I had ever seen. So to get to be in it this year is really exciting.”

How did being a part of PBT’s graduate program prepare you to become a professional dancer?

“When I came here just from a small studio, I came here and was in the graduate program for two years, and that definitely opened my eyes. You know, this is the real world and how it works. But, I feel like it definitely prepared me to have a career. All of the teachers whipped me into shape and helped me with my technique, and then you get a lot of performing opportunities. That helps you develop as an artist. That definitely helped prepare me.”

How do you feel about graduating and parting from some of your friends from the PBT School Graduate Program?

“This past May is when everyone finished. It definitely was bittersweet because for two years this whole group of us, we grew up together. It was our first two years away from home, and I feel because of that we really bonded, and we bonded in rehearsals and classes, and outside the studio we’d be there for each other so we wouldn’t get lonely. It was exciting because a lot of people did get jobs and offers, but it was bittersweet to say goodbye. But, luckily there’s skype and ways to keep in touch. “