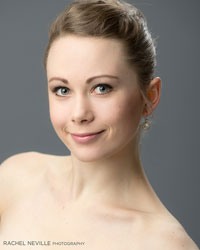 Top-played song: Overload by Life of Dillon and In the Upper Room by Philip Glass

Years Dancing: Since age 6 in ballet and age 3 in dance

Family: “Both my parents are British and they grew up in Surrey, which is just outside of London. I have an older brother and older sister. We moved to China when I was 1, so I haven’t really grown up in England. My grandparents have had the same house since they were married so it’s something very familiar that I go back to. My parents are moving to the West Coast this summer, so they’re going to be on the other side of the states. But they’ll still be in the same country, which is better than across the world.”

Hometown: Coventry, England. “I lived in China until I was 6, and then we moved to Thailand where I lived for five years. In between that I moved back to England for a couple years. After Thailand, we moved to Canada (age 15), which is where I began my professional training. I lived there for two years and then moved to Russia. So where is my hometown? That is something I still ask myself often.”

Surprising Fact: “I went to Chinese kindergarten for a while, but my parents decided to home school me as I was learning Chinese quicker than English and they wanted to make sure I learned English well. I speak Chinese, Thai, Russian and English, not all to the same level but enough to get around and speak to people. I still sometimes speak to my family in Chinese especially if I don’t want other people to understand.”

Pets: “I don’t have any pets here in Pittsburgh now, though my parents still own Ruby, their rough collie. However, I grew up with quite a number of pets. We always had cats, and I bred rabbits when I was young. We had two ducks at one point. Maybe in the future I’ll want to get a dog again.”

What is your favorite non-dance hobby: “I have one little thing, which I love doing which is taking evening walks. It’s kind of a necessity for me each day. And, I love playing piano when I get a chance.”

Favorite Way to Relax: “I love being creative with food or cooking. I love experimenting… I love spice. Spicy food is my thing because of growing up in Asia.”

Backstage Good Ritual or Prep: “I always spray my ribbons and make sure they’re tucked in… step away from everyone else for just a minute or two and close my eyes and envision where my mind is so I’m calm and present in the moment. Just little things like that. I try not to get too intense, because I can be a very intense person. I tend to try to keep it calm and (focus on) the little things that matter.”

If I wasn’t a professional dancer, I would be….. “I feel like I would be something in the same field, like a massage therapist or a physical therapist or a nutritionist. That stuff really interests me.”

How did you first get your start in dancing?

“My ballet training started in Thailand… Then we moved back to England and I went to a small studio in the North where we lived… It was mostly (ballet) exams and technical training. I did a few little performances and went back to Thailand where I began training more vigorously. I did the leads in the shows that we had (including The Sleeping Beauty). That’s when I told my parents that I wanted to pursue it more professionally…I chose to go to (a program) in Canada and trained there and then toured to China. A short time later, I got invited to go to Vaganova Ballet Academy (including experiences with the Mariinsky Theatre), and then as I was ending my time in Russia I knew, ‘I want to go to PBT.’ That’s when I came to the states.”

Describe your ballet epiphany – or the moment you knew this was the career for you.
“I don’t really remember having a moment where I was thought, ‘Oh this is definitely what I want to do.’ Because I began dancing at such a young age it was something that was just very natural to me. I remember at night going into the living room and putting music on and just dancing for hours. I feel like it was always something I was doing…I remember the feeling that I felt when I was dancing. It was an incredible sense of ‘this is something I can’t stop doing.’ It gave me such pleasure. I think the turning point when I discovered that I wanted to do it professionally was… touring to China when I was in Canada. It was such an amazing experience…doing ballet as a more professional way of performing. It made me realize, ‘This is the life that I want to live’ – touring and performing and just being onstage and having that ability to affect people in the audience even when it’s in a different culture. They’re able to understand you and what you’re portraying, and that’s really important for me. That’s why I do ballet. It’s not only for my own enjoyment; my desire is for people to be affected positively by the presence that I give them onstage. No matter if it’s a solo or principal role or if you’re in the corps de ballet, I believe that the presence shown on stage is what captures people’s attention.”

Across the many different countries that you’ve danced in, how has the technique or style differed?

“I think I’ve taken different things from each different place. The training I had in Thailand and England was very academic but it was such a solid base when I was young. Then when I was in Canada, the directors of the school were Chinese, so the training had a slight Russian influence, which made it a much stricter training method to what I was used to.  That Russian influence is what led me to Russia …When I was in Russia it was so strict, it was very particular, a little bit too particular for me. When I came here, I found that freedom of being able to take that technique but become an individual…I feel like I’ve been able to take different things from each place and make it my own. At times I feel like training at one solid place your whole life is easier because you have that consistency, but at the same time seeing the variety of styles that are out there, I feel I have a little bit more knowledge of what I want to be and what I want to become as a professional. My eyes are more open to what the ballet world is as a whole.”

At that the same time that you noticed the differences in technique between countries, did ballet make it easier to adapt to different cultures and places?

So far in your dance journey, describe your most memorable moment onstage. 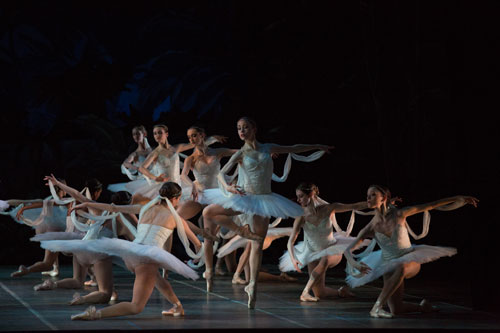 “It’s actually since I’ve been at PBT. My favorite ballet has been La Bayadère from the time I worked on it with a lady from the Royal Ballet during my training in Thailand. Getting to perform it with PBT this past season as my last company production as a Grad was something I will cherish greatly. Despite the nerves and whatever mishaps that happened, nothing could take away the feeling of utter inner peace and enjoyment. The only way I can describe the feeling that I felt onstage is almost as if a gush of sparkling lights and butterflies race through your body and finally settle down throughout each limb but never stop moving.  Now I finally understand why determination and total commitment are completely necessary to finding that confidence that ‘this is what I’m meant to do.’ I think being with PBT and the company has given me a stronger sense of ‘this is where I want to be.’”

What’s the top takeaway from the PBT School Graduate Program that you think has helped propel your career?

“The Grad Program has been amazing.One of the most vital things I learned is to be yourself. I believe that is how I developed so much artistically, technically and even just socially. Another big thing is being professional…having that good attitude and understanding that you have to take everything the teachers are saying and apply it. That’s why they’re there – trying to help you get to the professional stage.”

Which 2015-2016 Season production are you most looking forward to?

“There are so many good ones…It’s so exciting. Le Corsaire is going to be amazing, because it’s such a big ballet and I love classics, but I think a highlight will definitely be Western Symphony. I feel so honored to be involved in this season and being able to continue to develop.”

What is your top goal for your first season as a professional?

“Of course my ultimate goal is to become the best I can be and never stop improving. However, as this is my first season with the company, I think it’s really important to give my utmost to each role I am given and show sides of my dancing that perhaps push me outside of my comfort zone and show my versatility. I don’t want to take things for granted, but develop technically, artistically, and continue being me.”