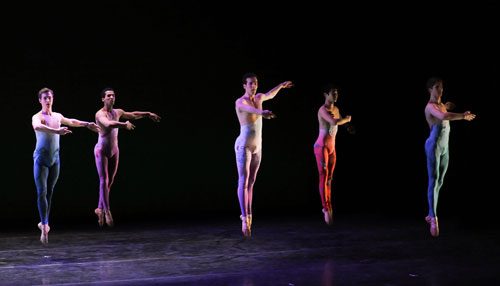 Backstage Ritual: I can’t eat a lot at all before a show.  I’d rather feel more on the empty side than weighed down, and I usually eat a lot afterwards. Depending on the show, about 15 minutes before I go on I am always down at the stage rewarming up a little bit.  I usually knock on the stage three times, secretly, because I’m a little embarrassed how superstitious I am.  Then I’m ready to go!

Top-played song on your iPod: Max Richter’s re-composition of “Vivaldi’s Autumn 1,” which I am using for the Company Experience.

Non-ballet hobby: Camping. It’s a newly found hobby that I haven’t done yet but will be doing a lot in July. My girlfriend, JoAnna Schmidt, and I just bought a tent!

Family: I have a mom, a dad, a 16-year-old brother named Carson and a 23-year-old sister named Bailey. Just two aunts, two uncles, two cousins and no living grandparents.  Then of course my PBT family away from family.

Favorite Role: Being a stomper in Twyla Tharp’s In the Upper Room was a dream.  I’d say that’s my favorite role I’ve danced so far!

Go-To Relaxation Activity: Netflixin’ it up!

What are three things in your ballet bag right now? My cell phone and head phones to use Spotify, one of those soft tee-ball baseballs for rolling out, and a notebook. I own lots and lots of notebooks. 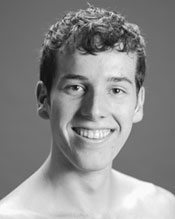 In additional to performing professionally, you have also choreographed works for Dancers Trust, Point Park, and now, PBT School students. Can you describe how you first discovered your interest and talent in choreographing?

The first piece I ever choreographed was at Houston Ballet’s summer program.  It was for the American Festival for the Arts, a program where student composers team up with student choreographers from Houston’s summer intensive to create a piece.  I had an interest but was unsure if it would turn out good, if I would like the process, if the students in my piece would even listen to me and so on.  I decided to do it and it turned out to be so rewarding!  I was so excited that I had done it, despite my insecurities and doubt about it, and that I had had a pretty successful first go.  I choreographed for three summers in a row and became the regular of the program, which I took pride in.  I really gained a confidence throughout those three years and was constantly encouraged by my teachers there.  Now, I don’t ever think about not doing it.  I jump at every chance I get to create and just do my best and try to make something meaningful.  It makes me happy and it’s so rewarding when i see it makes other people happy too.

What does choreographing fulfill that you might not experience through performing alone?
This question is really hard to answer without writing a novel and sounding wicked cheesy, so I will do both. It’s a creative outlet.  It gives me complete freedom, and it feels so liberating to have something that is up in your mind become a real thing in the studio and on stage.  I know this may sound backwards, but it’s almost a safe way to convey my thoughts.  An example:  I have done one very personal piece, and at the time I was very confused and embarrassed about it.  I used choreography to say what I couldn’t say in words.  It’s easier for me somehow.  And I actually got great feedback on that piece, where people were saying that I really spoke for a large group of people.  One man told me that my choreography could help kids going through similar things, which was incredible and unbelievable to hear.  But the biggest benefit of doing that piece was that I felt less alone afterwards.  I felt calmer about it.  You know when you just have to get something off your chest?  That’s what I get out of it. People are in a theater, and they have to listen!  Comparing performing and choreographing is like apples and oranges to me.  When you’re performing, you are the instrument for the choreographer, and it’s really fun and challenging and gratifying to be that. Being on the flip side though, is a whole other thing, and it’s great.

What type of insight or advice do you hope to impart to the students attending the Company Experience workshop?
I don’t know.  I never really looked at it as a way to impart anything on anyone else.  Is that bad?  I guess I would answer by saying that I have been inspired by many choreographers. Just seeing their passion and how their minds work is a motivation. I find that it pushes me to emulate their work ethic and creativity.  It also snaps me into the process, and I find that I’m fully invested in the product that they’re trying to achieve.   If I could do that for somebody in the program, that would be amazing.  It’s less of a goal and more of an awesome and unexpected bonus.

Throughout this workshop, students are going to experience a full, action-packed rehearsal day that is your daily norm during the season. How do you get in the zone for a challenging rehearsal day? What do you do to stay healthy and energized?

I get a good amount of sleep because I can’t really function without it.  I also eat a big and healthy dinner.  I try to drink plenty of water throughout the day.  I think I get dehydrated easily, and a little water goes a long way.  Water is the cure to everything, it’s crazy.  Also, trying to keep a focused and positive attitude is key.  A ballet can be fun and totally possible one day, and then impossibly hard and heavy the next.  It’s your mindset.  And I think I’m just now learning this.  Surround yourself with positive people at work and outside of work, and you’ll feel a difference.

If I wasn’t a ballet dancer I would be…
Lost (laughs).  A modern dancer?  That’s probably cheating.  I anticipate being a full-time choreographer when I retire from dancing, but maybe that’s not different enough either.  I’ll say sign language interpreter.