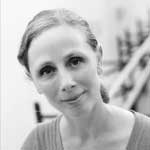 For years, PBT Artistic Director Terrence S. Orr has followed the works of choreographer Julia Adam and looked for the ideal opportunity to feature her unique sense of movement. That moment has arrived as PBT prepares to give her cross-cultural fusion Ketubah its Pittsburgh premiere during PBT’s 3×3 program, onstage March 7-16, at the August Wilson Center.

A lively work built around 16 dancers, Ketubah follows a bride and groom from first glance to wedding night, flowing through the elements of a traditional Jewish wedding: the ritual bath, the groom’s party, unveiling of the bride, ceremony under the chuppah (wedding canopy) and the final celebration. Throughout, Adam draws from her own heritage to set in motion a series of Jewish marriage customs through a hybrid of ballet, modern and Israeli folk dance accompanied by traditional Klezmer music.

Canadian-born Julia Adam received her early training in her hometown of Ottawa, Ontario, and at age thirteen began studies at the National Ballet School in Toronto, graduating in 1983. She spent the next five years honing her skills at the National Ballet of Canada. In 1988, Julia joined the San Francisco Ballet, where she finished the remainder of her dancing career, gaining prestige as a principal dancer known for her lyricism, musicality and broad theatrical range. After retiring from dancing in 2002, Adam was able to devote more time to her love and talent for choreography. She created her first ballet,The Medium is the Message, in 1993 for San Francisco Ballet’s Choreographic Workshop, drawing much attention for her uncanny wit and unique sense of movement. Since then she has created a number of works for companies, including Marin Ballet, The Bay Area Dance Series, Ballet Met, Alberta Ballet, San Francisco Ballet, Houston Ballet, Oregon Ballet Theater, Atlanta Ballet and Nashville Ballet among others.

Describe the movement vocabulary of Ketubah and the various influences – ballet, folk and contemporary. – that you drew from to create this work.

The movement vocabulary is derived from a classical base and was developed from some of the shapes and gestures found in Jewish folk dance and Chagall’s paintings.

What inspired you to draw from your religious heritage to choreograph around this particular theme?

The piece was made for my mother. I pulled from my Jewish heritage and found that the wedding rituals provided an inspiring underlining structure.

Being that March is Women’s History month, what is it like to be a female choreographer in the ballet world, which tends to skew toward more male choreographers. Does it give you a different perspective on the art form?

Art reflects life. The hierarchy in the dance world is not unlike the way the rest of the world has been organized. The rise of women in the power structure is reflected back into the ballet world. I have found that my acknowledgement and continuous choreographic career shows change.


Throughout the work, you make very evocative use of a piece of white fabric. Describe the symbolism behind this design motif. Are there any other significant themes that audiences should look for?

The chairs represent the houses of study where the men were educated and learned to argue the fine points of the traditions. The candles are present because they are a huge part of Jewish ritual and the flame holds a mystical aspect.

Finally, this piece is set to traditional Klezmer music. Can you describe the feeling of the music and how it was developed for this piece?

The score of Klezmer music is very important. It is the driving force. They are all traditional songs that were often used at weddings and makes for a magnificent and authentic soundscape.