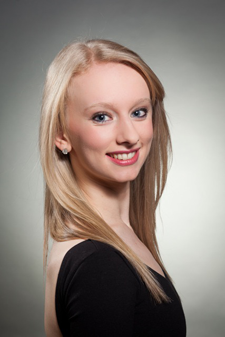 Student Caroline MacDonald just wrapped up her third PBT School Intensive Summer Program by showcasing, not only her ballet technique, but her own choreographic creativity. Between full class days, six days a week, MacDonald found time to choreograph a three-part ballet inspired by three Joni Mitchell songs. MacDonald’s “Raised on Robbery” – which clocks in at 7 minutes, her longest choreography to date – was part of ISP’s final student choreographic showcase in late July. Along with herself, the work featured three of her fellow ISP students. The piece will be MacDonald’s fourth original work for PBT School, following her pieces “Little Sparrow,” “Snowden’s Jig” and choreography set to Ellie Goulding’s “Lights.”

Dance Role Models: “Honestly, I love watching Amanda Cochrane dance…I just love the way she dances and her performance quality…Julia Erickson too, I work with her in Barre – A Real Food Bar, and so I look up to her a lot as a role model in more ways than just a dancer. From back home….Alison Roper of Oregon Dance Theatre. She’s absolutely stunning.”

Inspiring Choreographers: “It varies. Because, I love doing Balanchine work, but I don’t think I necessarily choreograph like him. I have bits and pieces that I kind of pull from his work…but I always love to watch Ohad Naharin’s work from Batsheva Dance Company in Israeli, and Trey McIntyre definitely is one of my all-time favorites.”

When I’m not dancing, I am: “I am very into vegetarian and vegan cooking, so I have my own blog. So I’m often posting on that and trying to come up with my own home recipes.” Caroline also works as an intern for Julia Erickson’s company, Barre, and also belongs to a mini PBT book club.  Among her recent reads is, “The Painted Girls,” about Paris Opera girls during Degas’ time

What sparks the creative process for your choreography? Do you start with a song or a movement phrase, for example?
“It’s the music pretty much every time. The first thing I do is pick a song and then I start choreographing from that. There have been rare occasions where I’ve come up with something in choreography class that I ended up liking and then found some music to go with it. But for the most part, it’s pick a song and then just see what happens…Pretty much with all of the music I choose, it’s either really easy for me to pick a song or it’s a huge challenge. I won’t use a song unless I can play it and immediately start visualizing movement in my head, because then I know it’s going to be a lot easier for me to choreograph to.”

Describe your choreography style.
“…I think that all of them definitely have a ballet base to them, because that’s what I do most. Last year, I think, was definitely more advanced than my first year. I was choreographing some partnering for the first time, so that was a challenge and fun. I threw in a mixture of different ballet steps mixed with what I’ve done in contemporary work, so…a mixture between ballet and contemporary and then {influences from} the different choreographers I’ve had a chance to work with all mashed together.”

How do you go on to choose the dancers for your choreography?
“I can usually tell from watching someone whether they’re going to be able to fit my style of movement or not…mainly the people who learn quickly and who seem to be pretty versatile, that have really strong ballet technique but then also are really good in modern class and are very open-minded and seem like they would be fun to work with.”

What type of choreographing process do you usually use?
“I do a lot of writing… I’ve been just sitting at a table with my eyes closed, and I’m visualizing movement in my head versus getting up and trying to work things out with my body…then I open my eyes and really quickly write out what the movement is. It’s just gibberish half the time…but definitely if I didn’t have that notebook it would be really hard….It’s makes it way easier to re-teach…Random inspiration, it helps too, to really quickly jot it down. Like, Yoland Collin (PBT Company Pianist) today in class was playing a song at the end that all of a sudden I got a few steps from…I’m probably going to go write down what I came with so I can put it in the choreography later.”

Why Joni Mitchell?
“I really love her voice. I think it’s really interesting. This year I decided I wanted to choreograph to lyrics. {“Little Sparrow” and then “Lights”} were actually my first time choreographing to lyrics…I enjoyed the challenge…Joni Mitchell, it’s the lyrics. That’s what the songs are, because she has such an amazing voice…I didn’t want to pick a song that was a current pop song, even though there were quite a few alternative songs that I really liked…I didn’t want to use a song that everyone in the audience would be able to sing along with. I picked Joni Mitchell, because especially kids my age haven’t heard of her stuff….I figured it would be cool to use something that would kind of give something new to the audience music-wise, and would also give me a challenge to work with.”

Why did you select these particular Joni Mitchell songs for your piece?
“Originally my first song wasn’t going to be “Car on a Hill”…my original first choice just wasn’t working. I sat down and nothing came to mind. So then, my mom – she’s a big Joni Mitchell fan too –texted me and said, ‘why don’t you use “Car on a Hill,” it’s my favorite one and it has a good groove,’ and I ended up loving it. Then the second one, “Twisted,” has always been my favorite song by her. I just love it – it has such a great personality… And, (Raised on Robbery) is so upbeat, it has so much energy to it, and I love that it has kind of a jive feel to it…I’m using a lot of that kind of movement in it as well…if you’ve ever watched competitive ballroom and you see them do the jive or the lindy hop with…very quick, sharp foot movements with bouncy jumps, very kind of 40s and swing kind of style…”

This season, PBT is presenting some really powerful mixed repertory programs. As a choreographer, which works are you most looking forward to?
“I’m really excited to see the Twyla Tharp. And then of course the classical ballets, I love all the time. But, I haven’t seen a lot of Twyla Tharp’s work in person, so I’m really psyched to be able to watch that. I think that her choreography is just awesome…I love the mixed bill stuff, especially because you see the dancers every day in class…classical ballet…and then you see them do something contemporary like Twyla Tharp, or like last year’s mixed bill…it’s like a different dancer onstage. You had no idea that they could move like that, and they’re definitely pulling it out of a completely different place, so I think it’s so interesting to watch. And just from a standpoint of mixing it up between the classical ballets, being able to have something that’s really happening right now, I just think it makes the whole season more interesting and it definitely gives the dancers more dimension.”

Your “Raised on Robbery” includes influences from ballroom dancing, which is also strongly represented in Twyla Tharp’s “Nine Sinatra Songs.” What do you find so inspiring about ballroom movement?
“I just think there’s something so interesting about ballroom dance, because it’s not really like any other style…the ballroom dancers can move like nobody else can. It’s really just so interesting how they do it…I think it’s the way that they time their movement. There’s such elasticity, but they’re incredibly sharp and precise. They’re just incredibly smooth…even if they’re doing the sharpest of movements it’s just so incredibly effortless and it looks like it should be so easy, but…it’s just so hard to do.”

As a dancer and choreographer yourself, do you have a special appreciation for abstract, completely movement-based ballet?
“That’s what I like doing actually. I don’t choreograph with a story behind it…There might be a specific mood or a specific kind of person that’s doing the dance…I think that they can be very accessible to people even if they don’t have a story…I think that the cool thing about pieces without a story is that you’re just watching the movement…I  think that can be so effective if you can create a piece that audiences love just because the movement the dancers do makes it beautiful versus a beautiful message behind the movement. I think it adds an extra little bit of challenge…if you can manage to create that, I think it’s really special.”

What is the mood you want to create with your piece?
“What I’ve been telling my dancers is that I want us to all appear to the audience as extremely sophisticated, and kind of cool like…everything we’re doing – even if it’s very high energy and sharp and extremely cardiovascular like the last song – it still all seems very easy to us, nothing fazes us. ..I want the whole mood of the dance to be very sophisticated…nothing in it is a big deal, yet the dancing is not easy.”

5. It’s A Shame About Ray – The Lemonheads