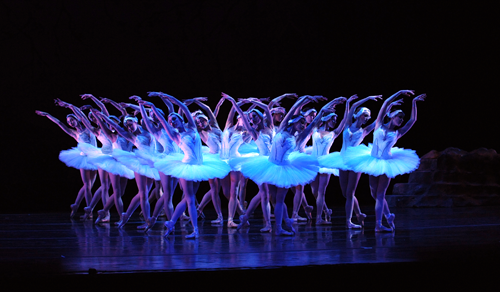 Odette/Odile may be the iconic role of Swan Lake, but the ethereal aura of the corps de ballet commands its share of the spotlight with some of ballet’s most famous ensembles scenes. “You very much become bonded as girls in the corps of Swan Lake, and that’s a rewarding feeling,” said PBT’s Caitlin Peabody who talks in this Artist Spotlight interview about transcending the challenge and creating corps chemistry. Read more about Caitlin and her thoughts on Swan Lake here:

Non-Ballet Hobbies: I’m very into reading, I do lots of cooking, and I love movies.

Siblings: My sister, Samantha, is 17 months older than me and my brother, Les, is four years older than me, and we’re all very close.

Favorite Role: The bomb squad in In the Upper Room. I’ve done that twice now in my career, and I’d do it again in a second.

Dream Role: I’ve always had three: Giselle, Juliet, and In the Upper Room was one of them, so I checked one off!

3 Things You Always Have in Your Ballet Bag: Chapstick, I always have my leg warmers (right now they’re purple—I like that little pop of color!), and a nail file because I can’t stand = a broken nail; I can’t concentrate. 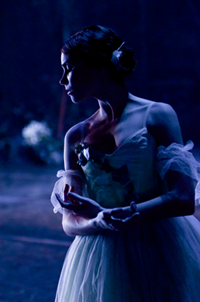 Swan Lake is one of the most popular ballets of all time. As a ballerina, what do you think makes it so timeless, and why is it special to you?

It’s iconic… the white tutusand so many girls. It’s this huge corps, with the most beautiful music and the principals. And it’s a love story—a tragic love story—which is appealing to people. Everyone loves a good tragedy and a good love story. When you see that many girls perfectly in a line in tutus with this music, and the exact angle of their heads, it’s just very ethereal. I think it’s every person’s idea of what a ballerina is supposed to look like.

How many times have you performed Swan Lake?

What do you think keeps it challenging, rewarding or exciting for you?

The first two adjectives I would agree with. It is honestly the most painful ballet experience as a corps member. It’s so hard to explain, and only girls in the corps who have done it get it…you’re onstage for such a long time in these very precise positions, and then you stand and your foot starts to cramp, and your mascara starts leaking into your eye, and you just can’t move. And fighting through that and making it to the perfection even through the pain is what’s so rewarding, and the audience really appreciates it. You very much become bonded as girls in the corps of Swan Lake, and that’s a rewarding feeling. It stays exciting here with (Artistic Director Terrence S. Orr) because this time around, there are so many different roles that I’m getting to play with now other than just the swans. In the first act and third act there are other roles, so that keeps it exciting. I’m rehearsing Pas de Troix and Pas de Six, the Cygnets, the Little Swans, I’m doing Czardas lead, and princesses, so there’s a lot.

The choreography and costumes of Swan Lake really create illusion onstage. Describe the feeling you get as you get into costume and into the zone.

There’s the costume, the tutu and the feathered headpiece, and you pancake your skin so you’re paler, and you put the big eyelashes on. And then the lighting dims, and when you’re standing there you immediately feel like those pictures you look at—ballerinas with that porcelain look. Then it’s very easy to just get involved in the music and feel the emotion…!

How do you work with other members of the corps de ballet to synchronize your movements so flawlessly?

It’s a lot of standing and talking: “Okay, what angle are you going to put your neck at?” Honestly, it’s every girl—we’re only as good as our members. You have to hope that every girl in that corps is taking it as seriously as you, because if they don’t care, then it’s not going to look good because not everyone’s focusing on the angle of their neck or caring about it, and that’s what’s really important. Also, we spend time onstage deciding on whether you’re going to be on quarter or eighth and what wing (stage markers to use as reference points for placement).  You are very much focused in on where you’re standing, so it’s not like when you’re in a principal role, and you’re just freely throwing yourself into it. You have to pay attention to what’s going on around you 100 percent of the time.

What do you think makes the role of the Swan Queen such a coveted role for the ballerina, as opposed to some of the other great roles?

I feel like that’s hard for me to answer because it’s never been a role I’ve seen for me. I’ve always seen myself as Giselle or Juliet. But for the Swan Queen, you get to be two people—you get to be good and bad, and who doesn’t want to do that? It’s like taking your acting to a whole other level, because you don’t just play one character the entire time, you play two, and you throw yourself into it, I imagine, very deeply.

How do you usually get into the zone before a performance or a challenging rehearsal day?

I start my day at the barre. No matter how sore you are or how good you feel that morning—and it’s totally random sometimes with me—you have to breathe at barre. You can’t be on your game already at barre. You have to just be relaxing through your muscles and warming up, and just being conscious in your mind for 45 minutes.

Then you take class in stride. You can go crazy in class and get  energized for your day, but if you have a six-hour rehearsal where you’re going to be running Swan Lake twice and you’re going to be running a soloist role, maybe don’t kill yourself in class. So that’s where I like to start, just mentally focusing in class. Instead of just going through the motions, I like to really think about everything I’m doing.

Do you eat any differently on performance days?

On performance days I usually have a second cup of coffee! During a performance week, my dinners are really strict. I like to have a cup of tea because it’s extra hydrating and cleansing, and I definitely always have a main protein—either fish, or I’m a big meat-eater as well. I eat a lot of sweet potatoes too, but that’s just in general. They’re delicious!

Was there a moment you knew you wanted to dance professionally?

There was an exact moment, actually. I had gone to Boston Ballet School Intensive. I went to the summer program for fun, really, and I stayed for the school and for the intensive. I liked it and I loved dance, but I didn’t really think anything seriously of it. It was freshman year of high school, and I still didn’t know, and then I saw a performance of Giselle by Boston Ballet. The girls as the Wilis chugged (move in arabesque) across the stage to the music, and I was like, “Done, I’m doing it.” I decided right then.

What does ballet mean to you?

I’m horrible at verbalizing my emotion, so people can tell my mood and my feelings through my dancing. Ballet is my way of talking because a lot of the time it’s really hard for me. I’m always up for a good laugh, but emotionalizing is hard. Ballet is expression.

If you weren’t a professional ballet dancer, what would you want to be?

I’d want to be a personal chef back in New England, where I’m originally from. I love to cook, and I’d just love to live there, with that kind of food and that way of life.

What is your go-to relaxation activity after a long day?

A bath and a really good magazine. I like food and wine, so a glass of wine, my best friends, and a long night’s sleep.