Get to know Alexander here! 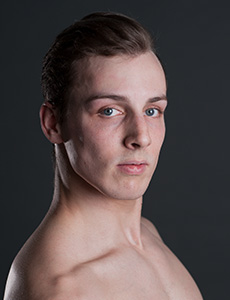 Family:  My mom, dad and brother live in New York. I love being close to them again.

Favorite role to date: A favorite role I have performed in the recent past was the Green Pas de trois in Balanchine’s Danses Concertantes. I really enjoyed it because it was very fitting to my style of dancing and personality.

Dream role: It’s a little challenging to name a dream role, but one role I would really love to dance is one of the men in Jerome Robbins’ Fancy Free.

Pre-performance rituals:  I’m not really superstitious, but before a performance I like to feed off the energy of my fellow dancers. Sometimes I listen to some music to get the energy up as well.

3 ballet bag staples: I always have some snacks to help refuel throughout the day. I also carry supplements with me such as BCAA’s (branch chain amino acids) and protein powder, and last but not least my massage stick and tennis ball.

Go-to relaxation activity:  My couch, a cold beer and a good tv show.

If I wasn’t a ballet dancer, I would be… A baseball player, and in that same fantasy I would play for the New York Yankees (haha).

What was your eureka moment for pursuing ballet as profession?
“My moment was at my first summer course the year I started ballet.  It was at Central Pennsylvania Youth Ballet, and on our off time the boys in the dorm would watch tapes of male dancers performing variations.  I had never seen what male dancing could be until that moment, and from that point I knew I wanted to pursue a ballet career.”
How would you describe the rush of performing?
“Oh man, I don’t really know how to describe it. For me it can be different depending on what I am dancing.  There are always those underlying nerves, but there is a lot of excitement mixed in there as well.”

What makes all of the time, energy and hard work worth it? What keeps you going?
“Well, performing is definitely a big part of what makes it worth it, but along with that, I believe the constant challenge keeps it interesting as well. For me that challenge to keep improving keeps me going.”
How did you first get into dance?
“I first got into dance, because one day my mother brought my brother and I to sit in front of the studio while she took an open tap class. I thought tap dancing looked so cool, and I immediately wanted to try it.  Soon after I started gravitating more towards ballet.”
What first drew you and continues to draw you to ballet? What does it mean to you?
“Ballet really drew me in when I saw men dance so strongly for the first time. It was just incredible, and immediately made me want to work towards that.”

What are you most looking forward to most about being part of Pittsburgh Ballet Theatre?
“I am most looking forward to challenging myself in terms of how I dance.  Thus far, I have danced for primarily Balanchine-style companies and have trained accordingly. Now I am really focused on taking on that traditional classical technique and aesthetic. It can be really frustrating at times when you feel like your relearning certain things, but I love a challenge.

What are your first impressions of Pittsburgh?
“I love Pittsburgh! Being from New York originally, and having missed the East Coast during my time in LA, my first impression was that it just read as an ‘East Coast city.’ I love the character of this city.”

Your PBT debut will be The Nutcracker. What’s your favorite thing about this tradition? Is there something comfortingly familiar about starting with The Nutcracker?
Yes it is! My favorite part of Nutcracker is it really brings out the cameraderie in all of the dancers.  We all know that a Nutcracker run can get really tough at times, so people tend to do what they can to band together and push through as a group.  There definitely is something comforting about starting with Nutcracker.  Even though all companies Nutcrackers are different, it is extremely familiar, and it helps to break the ice of being newbie in a company.