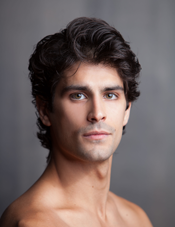 Behind the flowing fur and powerful jaws, PBT Soloist Alejandro Diaz has found empathy and understanding for the misunderstood hero he’ll portray in PBT’s brand-new fairy tale: Beauty and the Beast. Here, Alejandro shares his secrets to humanizing the man beneath the intimidating exterior.

Beauty and the Beast was originally conceived in the 50s and restaged in the 80s. Now, as PBT breathes new life into the production, what makes it continue to resonate with audiences today?

“As we’ve been rehearsing I’ve come to find that there’s a part of each one of those characters within each one of us. Especially the Beast – I think everyone has a part of themselves that they don’t want others to see, and…all of us do a pretty good job at controlling that part of ourselves. I think it’s a beautiful love story between two individuals who are really quite the same even though they may not look like it on the exterior. Both of them have a sensitive side. There are many times that the beast restrains himself because he recognizes that he looks like a monster, so a gesture that he may think comes across as caring and gentle really looks menacing and aggressive because of his features. Again that rings true for so many people….If a person interprets it another way, then no matter what you say it’s always going to be seen in the wrong light.”

Without recourse to facial expressions, how do you convey the tenderness and sensitivity beneath the Beast’s rough exterior?

“It’s a real challenge. It’s almost like those silent movies where the characters can’t speak…but with their physical movement – and obviously you can see their face and their emotions a little bit better – you come to understand what the story line is through how dramatic their gestures are. It’s an incredible challenge, because I can’t show it with my face. The mask doesn’t move…the jaw does but that’s about it. A lot of times when you can see someone’s eyebrows or even their lips – and especially  the eyes – it says a lot. You can’t see that, so it has to be done with the body. It’s hard to show the right thing without making it seem over the top.

Leslie Young – the repetiteur – has been great about helping each one of us find that. She’s absolutely right when she said that you can show a tender moment without being so rigid – even a slight tilt to the head or a softening of the chest- so you don’t look so grand. There are many times when the beast literally crumbles, because he takes a moment and recognizes and sees what he is. You see him; he visibly looks at his hands, and he’s like, I don’t know what to do. I don’t know how to convey that I’m not this person or this thing.”

Describe the transformation from Beast to Prince. How do you work this into your character building?

“This version of the beast is quite princely…he has a very aristocratic air to him in the way he walks and how he gestures for his simian to dance for Beauty and shower her with gifts…He does it very much like a prince would even though he’s wearing the garments of a beast…When he finally sheds that skin…it’s kind of like when you have a secret and you’re finally able to tell that secret and that weight is lifted off of your shoulders. I think that’s what it would be like. I think he’s finally able to be who he is.”

Describe Beauty’s character. What lies beneath her surface?

“I think it says something about her that at the first chance she didn’t just run offstage and get away from the Beast. She obviously can look past the fact that his exterior is so cold and harsh and see that there’s something inside that’s quite beautiful. That speaks a lot to her character. She gets showered with all these gifts and jewelry and then…when she finally does leave the Beast’s castle…in the cottage scene her sister says, ‘I want that,’ and she just gives it to them. For her it’s not about necessarily the gifts that she got, it’s more about the relationships that she could develop.”

Describe the emotion behind the choreography, ranging  from the poignancy of the first pas de deux between Beauty and the Beast  to the first dance between the newly revealed Prince and Beauty?

“I think one of the most beautiful moments in the ballet is when the Beast hears her crying and…wants to go to her and comfort her, but he takes a moment and recognizes what he looks like and he says, ‘well, how can I do that without terrifying her.’ That’s one of the moments when he crumbles. But then he reaches out to her without her knowing… and there’s this whole pas de deux where she doesn’t see him but she can feel him. She can sense him. It really is magical… The ballet quickly develops that connection between the two characters by representing that they don’t need to see each other to know that they’re there for each other. Then it changes quite dramatically when he basically asks her to marry him. That pas de deux is kind of like the desperation pas de deux. He becomes a little more aggressive with her. The movements are a little understated… they’re delicate but aggressive at the same time, and I think it’s a very hard combination to achieve…There are two parts to the Beast: He’s gentle and he’s human, and then there’s that other side to him where he’s kind of animalistic  and aggressive. Then he turns into the Prince in the second act, and you see that pas de deux between Beauty and the Prince.  It’s just a moment of awe when they finally  get a moment to take a look at each other stripped of any fear and they just take all of that beauty in. It’s an incredibly joyous pas de deux between the two.”

What is it like to dance while wearing such an intricate mask, paws and cape?

“I’m really looking forward to it because it’s going to give me the opportunity to really transform. When you take a look at the mask and the hands and all of it – the costumes – you become a totally different person… All you are is your physical movement. Yes, that’s me underneath the mask but people won’t see that. I think it really will allow me to become something else.”

Sub-title
The Man Behind the Mask