Over Valentine’s weekend, Pittsburgh Ballet Theatre revives the great love story Swan Lake with the PBT Orchestra, on stage Feb. 16-25, featuring new scenic designs. Swan Lake originally premiered in 1877 at the Bolshoi Theatre in Moscow and was revived by Petipa and Ivanov in 1895. From the ballet itself to books, films and fashion inspired by it, “Swan Lake” has captured the public imagination for over 100 years. Here are just a few reasons why.

1. The mystique of the Swan Queen. The ballerina’s dual role of Odette/Odile, or White Swan/Black Swan, is one of the most iconic in the repertoire, demanding technical mastery and emotional range to morph from vulnerable and pure Odette to audacious and deceptive Odile. Thematically, these polar-opposites symbolize a battle between good and evil. Choreographically, they also contrast. Odette is fluid and ethereal with the delicate carriage and rippling swan arms that are a signature of the ballet. Odile is virtuosic, demanding attention with a series of heart-pumping jumps and turns, including the famous 32 fouettes of Act 2.

2. The stirring Tchaikovsky score. Swan Lake was Tchaikovsky’s first ballet. By creating a score that was more like a symphonic work, he radically raised the bar for ballet music. But, at the time of its 1877 premiere, Tchaikovsky didn’t realize he’d written a masterpiece. Among the score’s stirring sections is the famous Swan Theme, which begins with quiet string tremolos and harp arpeggios announcing the lyrical oboe solo. The theme builds a sense of romance, wistfulness and mystery, hinting at the aura of tragedy that surrounds Odette. As the music crescendos, and the brass take up Odette’s theme with drama and intensity, it never fails to give us goosebumps.

3. Those chill-inducing swan arms. The undulating port de bras of the swans – a movement quality unique to Swan Lake – lends its own mystique to the classical vocabulary. Look for them in the second and fourth acts, during the ballet en blanc swan scenes. Lyrical and introspective, the corps de ballet’s movements and poses suggest the fluttering wings and curved necks of a flock of swans with rippling arms, arched torsos and trembling beats of pointed feet.


4. New scenic designs by acclaimed designer Peter Farmer. This February, PBT will debut new scenery by the late Peter Farmer, the same visionary behind PBT’s 2016 recreation of Giselle. In the words of Artistic Director Terrence S. Orr, who knew him well, “Peter was one of the world’s most sought-after classical ballet designers, working with companies like the Royal Ballet, American Ballet Theatre and the Mariinsky. He was a true artist, who hand painted every rendering. His designs capture incredible depth and light, much like a painting come to life, and will add an entirely new dimension to our production.”

5. A cast of nearly 100 lavish costumes. From Odette’s feathered headpieces to Odile’s ornate black-and-gold tutu, the 90+ costumes of Swan Lake are an essential part of the stage magic. In addition to the costumes, the production includes 470 accessories, including boots, headpieces and other items. There are the lush velvets and brocades of the courtesans robes and gowns…and then there are the swans. Their white classical tutus and feathered headpieces set them apart. Odile’s tutu in particular is made of silk dupionne with gold metallic appliqués, which give a feathery effect. The glitz and glamour of her costume immediately grab the audience’s attention. 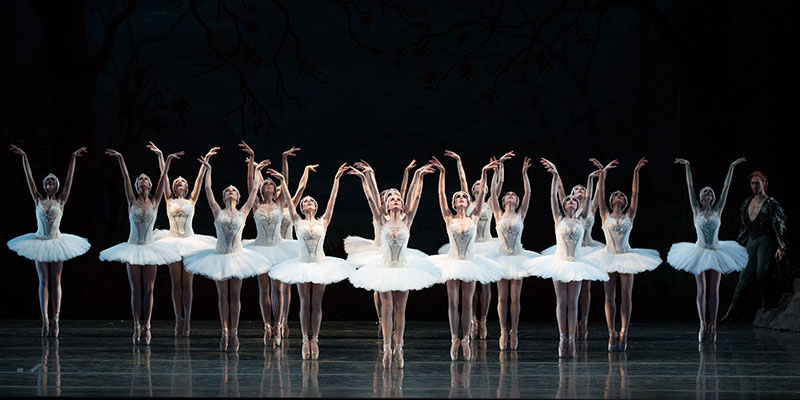 See the magic for yourself at Pittsburgh Ballet Theatre’s Swan Lake, on stage Feb. 16-25, at the Benedum. Get your tickets here.