Partners on Stage, Partners for Life

Love is in the air at Pittsburgh Ballet Theatre Studios! When our company dancers returned from summer break this fall, nine were engaged and two more were newly married. Find out which eight PBT dancers are also fiances. Here, five ballerinas share how, when and why they said “yes.” 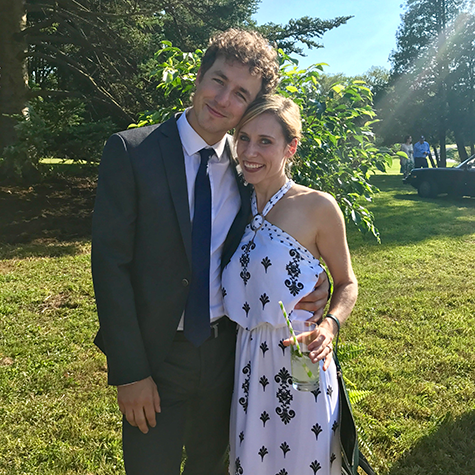 First spark…We were friends first, but realized later that maybe it could be something more. We started dating and discovered we were absolutely right!

On the proposal… It was just the two of us. We were having a glass of wine, watching the sunset on a beautiful view in Italy. Everything was set up perfectly, but Will was so nervous! As he started talking, I knew things were a bit more serious than usual. When he dropped to one knee and revealed a gorgeous ring, I was overwhelmed with emotion! I feel so lucky to be marrying such an amazing man!!!

On sharing lives and career paths… It’s nice to have someone that understands the ballet world so well. We both know what goes into our careers and how much it means to us. We understand the struggles, the hard work, and the moments on stage when it all feels worth it. Not only do we share similar interests in ballet, but also in life. We have learned a lot about house renovation together and both love spending time with our miniature schnauzer. 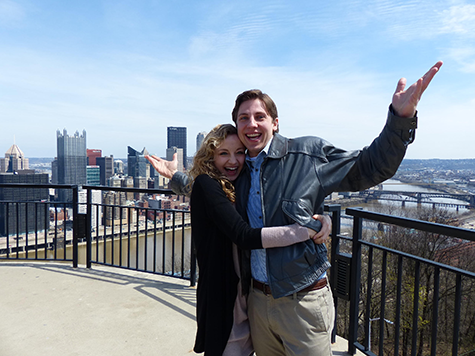 First spark… I was stretching before a Saturday ballet class, and he was exercising in the workout room. Joe introduced himself and we realized we are both from Ohio!

On the proposal… Joe and I went to mass at St. Mary of the Mount together and after church he took me out onto the Mt. Washington overlook and got down on one knee. He had our friend (and fellow PBT dancer) Dani Moya hide to take photos of the moment. The overlook has a special meaning to us both. It was definitely the happiest day of our lives!!

On sharing lives and career paths…It’s wonderful to have someone who understands what it takes to have a career in ballet and that you get to share so many special moments on stage together. When Joe and I danced the Nutcracker and Marie together, I had a bus load of family and friends come to see us dance together on stage. It was a blessing, not just to have so many people watch us, but also to get to act out a love story with the person I get to spend the rest of my life with! 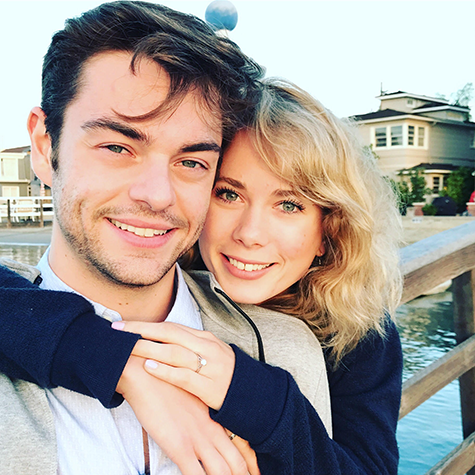 First spark… I think the wonderful thing about our relationship is that it started out so perfectly by being friends and working together everyday. He made me laugh and smile and the more we spent time together we both realized just how special each other was.

Location of engagement… Jake proposed to me at Balboa Island in Los Angeles, California. It’s a little island by the beach with docks, boats and beach houses along the pathway that goes around the entire island.

On the proposal… It worked out so beautifully because as he proposed, the sun set and the water was slowly moving the dock while the boats floated by. Very magical and romantic. His mum and brother filmed the whole engagement and took photos while hiding behind different things so we didn’t notice them. I was surprised for sure. We had talked about marriage for a while, so we knew we were going to get married. As for the day and the time, that’s something he wanted to keep a surprise. I felt so happy and, I suppose, in shock to a certain extent as the anticipation finally became reality. Jake was extremely excited and happy.

On sharing lives and career paths… I feel extremely honoured to be sharing my work life and normal life with Jake. The amount of stuff we can share and relate to is so wonderful. I can help him, he can help me, so it’s a wonderful balance of understanding each other so well. Getting to go to work with each other everyday and not have to say goodbye but know that we can be there to support each other during the week and then be able to really enjoy the days and times we have off is wonderful. I’m so excited for the future as we grow together, in our lives and in our work. 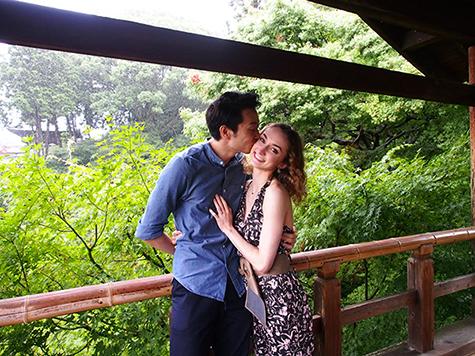 Years dating… 3.5 years. We are having a long engagement and getting married May of 2019.

Location of engagement… It was at Kyoto Japan, inside the gorgeous, ancient Tofuku-ji Temple in the Japanese Gardens. It was perfect.

On the proposal…The moment really presented itself. Yoshi wasn’t sure if he wanted to propose here or not, there were other ideas he had in mind. It’s one of our absolute favorite Japanese gardens, inside an unbelievably stunning, ancient temple, so it’s a very sacred place. The first time we visited it was last summer.

There is an area with a small deck that overlooks a river, with so many treetops you can’t see the bottom. Suddenly no one was around and it was silent: There was this truly magical feeling in the area. I looked to Yosh and said, “I would love to have a wedding in a place like this…it’s so breathtaking.” We both felt that moment, and during it he decided it was the moment to propose. I was looking out above all the treetops, and he told me to stay there. I looked back at him and saw he was setting up his camera on the floor. Usually when we travel, he sets his camera somewhere, sets the timer and runs into the picture with me. I assumed he was doing the same thing. I turned around and waited for him to come into the picture. He was taking longer than usual, and I turned around, about to ask if he was OK…and he was standing there with the ring in his hand, went down on one knee and asked me to marry him! It couldn’t have been more perfect. It felt like there was a soft spiritual energy holding us together frozen in that moment. Not one person interrupted as it happened and as we hugged and all the emotions were happening. It felt like that moment of peace was created for the two of us. We were there with two friends, Amanda Cochrane (PBT principal) and her husband, and when they finally came over and we told them what had just happened, we were all hugging and celebrating and they were so shocked! It was so fun. They took photos for us, and then they took us out and bought us a bottle of champagne and we had a lovely evening!

On sharing lives and career paths…It’s really a gift to be able to spend the day with each other at work and at home. There are so many things we can relate with, sympathize with and help each other with. Some days we have separate rehearsal times or our schedules won’t be exactly the same. So it’s nice to come home together and talk about how his rehearsal went or how mine went. We are each other’s support system, really. In a profession as hard as this one, you really need that other person to lean on or ask for help or advice. People who aren’t in your same profession can try to comfort and support, but won’t ever really understand how tired your body is or what a big opportunity means. We give each other corrections in class, help each other, and support each other so much. It’s amazing to watch each other grow in a career we’re both so passionate about. It also just creates really healthy relationship habits of respecting and trusting one another. We both love it and wouldn’t change a thing. 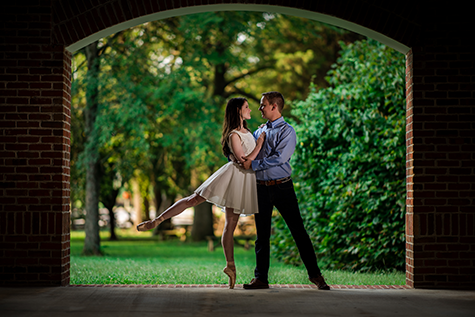 First spark…It was my first week at college (University of North Carolina School of the Arts) and I was sitting at a table with some new freshmen I had met at a meet-and-greet event, and Billy happened to stop by the school after his shift at Starbucks to check the schedules on the dance board.  An opera major sitting next to me convinced him to join us so that she could sing him a song about a boy from a coffee shop (she had done this for a few other students throughout the night). Billy obliged and happened to sit down across the table from me and that was the first time we saw each other.  We didn’t actually talk very much that night since he was mostly being serenaded by the opera major, but we both knew there was something special about each other.  Later he found me on Facebook and asked if I wanted to come visit him at Starbucks sometime, and the rest is history.

On the proposal…Billy proposed on Feb. 12, the evening after our first weekend of Alice in Wonderland performances.  I got home from the theater, and we decided to go out to eat to celebrate a successful first weekend of shows. I chose Panera since we hadn’t eaten there in a while and I love their soups and salads. After dinner, we stopped by Starbucks and Billy treated me to my usual coffee drink.  It was very reminiscent of the dates we went on at the start of our relationship. Back in North Carolina, we would often get Panera together after church and then grab coffee at the Starbucks he worked at which was just around the corner.  Once we got back home, Billy turned on Pandora and asked me to dance with him in the living room, which isn’t anything out of the ordinary for us so I was completely unaware that he was getting ready to propose. While we were dancing, he poured out his heart to me with the sweetest words I’ve ever heard and the next thing I knew he was down on one knee asking me to be his forevermore. It all happened so fast that I can’t say exactly what emotions I felt except that I can sum it up as pure joy and excitement. Billy felt a mix of nerves, anxiety, excitement, and (once I said yes) relief and happiness.  It such a huge step in our lives that we both felt butterflies in our stomachs for days afterwards.

On sharing lives and career paths… Although he doesn’t dance anymore, Billy studied classical ballet for 15+ years.  He knows how demanding it is and how stressful it can be sometimes. It’s such a blessing that I get to spend my life with someone who understands what I do on a daily basis, but can also help me keep my physical and mental health in check. He constantly encourages me to work harder and push myself to improve, but he’s also careful that I’m not making myself stressed by over thinking or overworking my body. He constantly makes sure that I’m getting the most out of my recovery time by always reminding me to roll out or put my feet up so that they’ll be well rested for rehearsals the next day. He’s my biggest fan and I don’t know what I would do without him by my side.

Congrats to the PBT newlyweds! 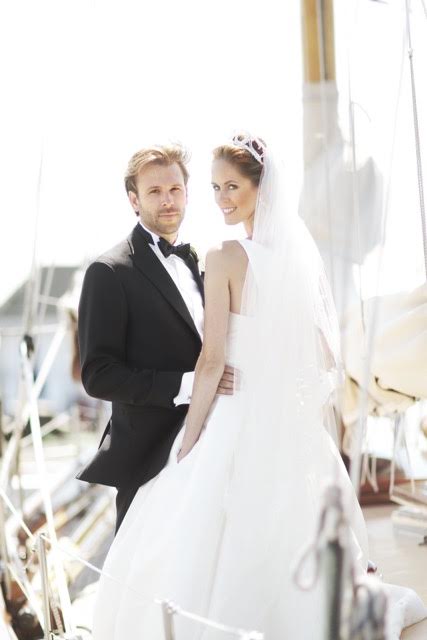 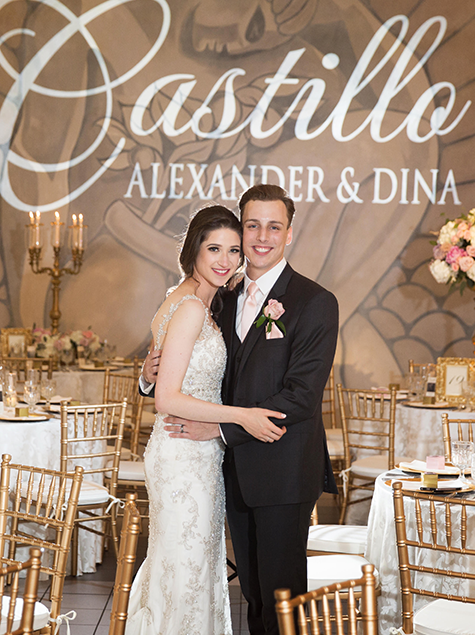