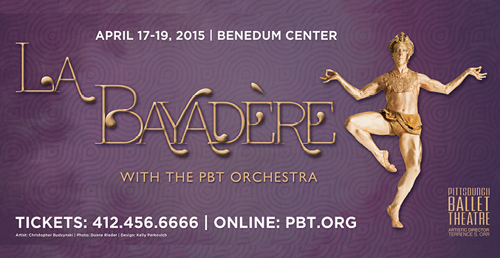 In its 45th Anniversary Season finale,Pittsburgh Ballet Theatre will stage the company’s largest classical ballet to date with the Pittsburgh premiere of the mesmerizing “La Bayadère” with the PBT Orchestra, onstage April 17-19, at the Benedum Center.

“La Bayadère” is a grand, 19th-century classic featuring a drama-charged storyline and more than 100 roles. Set in ancient India, “La Bayadère” tells the story of Solor, a noble warrior, and Nikiya, the temple dancer he loves. Ensnared in a love quadrangle by imperial powers, the couple finds themselves ripped apart by jealousy, intrigue and betrayal. “La Bayadère” claims fame for its pure classicism, epitomized by the ethereal “Kingdom of the Shades” scene and the stunning synchronization of the corps de ballet.

Artistic Director Terrence S. Orr is re-staging the 138-year-old Russian classic based on interpretations of the original Marius Petipa choreography. The original production received its world premiere in 1877 by the Imperial Ballet at the Bolshoi Theatre in St. Petersburg. PBT’s production will feature costumes and scenery after original designs by Sergiy Spevyakin, and the PBT Orchestra will perform the Ludwig Minkus score under the direction of Maestro Charles Barker.

Performed by some of the largest ballet companies in the world, “La Bayadère” marks an ambitious season finale for the company. Choreographic standouts include the iconic “Kingdom of the Shades” scene, featuring the hypnotic effect of 24 ballerinas descending on the stage in arabesque, and the technical feats of the statuesque Golden Idol. Accented by rich jewel tones and gilded scenery, the sets and props create a mythical ambiance with opulent temple and palace scenes and sweeping vistas.

Audience members are invited to attend the following free programs:

Audio-description Services
Patrons can sign out headsets to hear a live narration of the performance. Services are by request only with two weeks’ notice. Please contact 412-454-9109 or education@pittsburghballet.org.

Next Onstage: 2015-2016 Season Opens in October
From the choreography of George Balanchine to the music of Johnny Cash, PBT’s newly announced 2015-2016 lineup features major contemporary choreographers, audience favorite “Peter Pan” and the company premiere of the full-length classic “Le Corsaire” with the PBT Orchestra. The five-ballet season runs October 2015 to April 2016. Season ticket packages start at $78, and can be purchased online at www.pbt.org or by calling 412-454-9107. Single ticket sales open Aug. 31, 2015 with prices starting at $28.