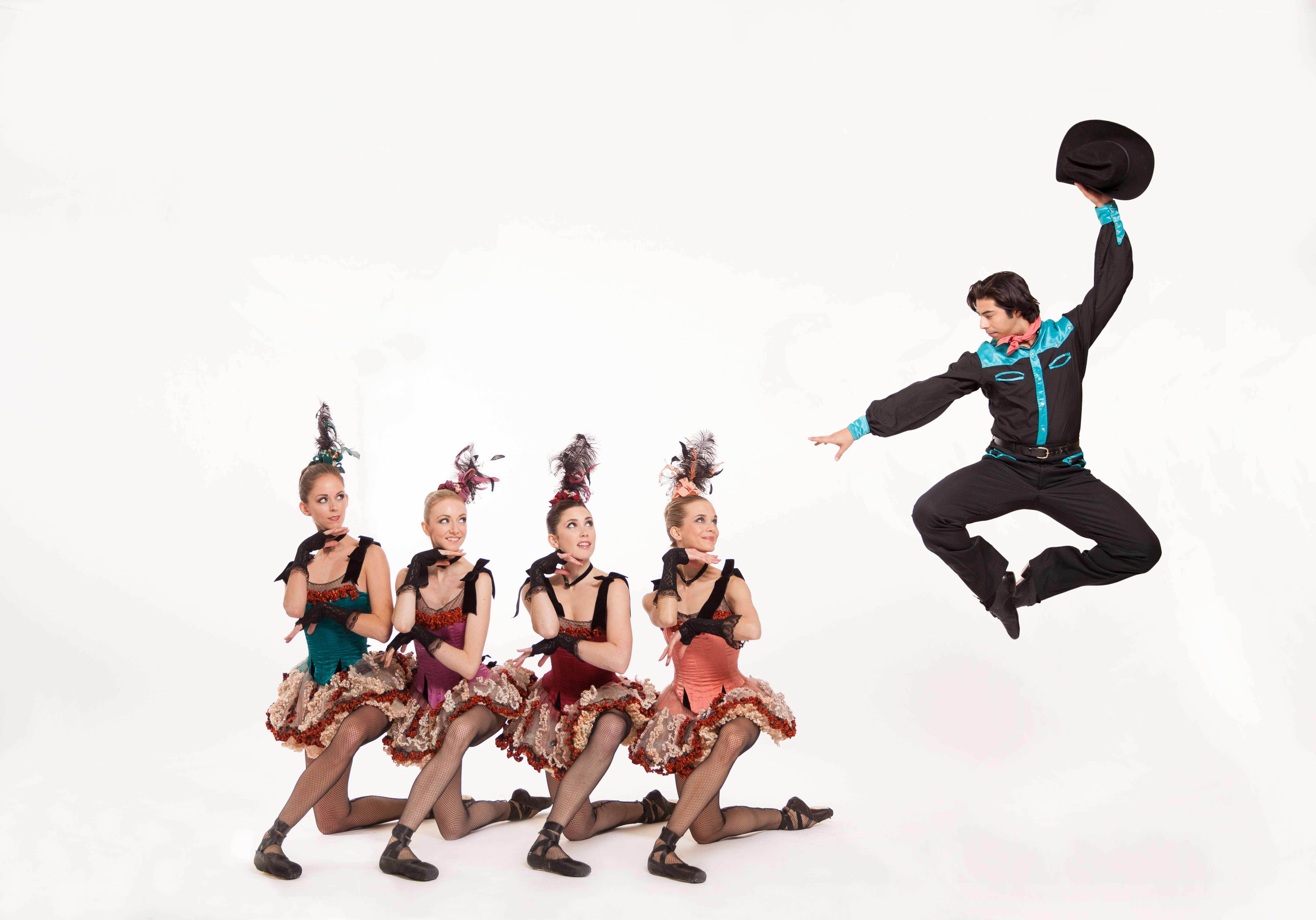 In an ode to the Old West, George Balanchine’s rollicking Western Symphony ventures into the frontier of classical ballet and American folk dance with a stage full of swaggering cowboys and spirited dance hall girls.

“My idea in this ballet was to make a formal work that would derive its flavor from the informal American West, a ballet that would move within the framework of the classical school but in a new atmosphere,” Balanchine wrote of the ballet.

With the women in frilly frocks and the men in kerchiefs and cowboy hats, the scene is a dusty Old West town where folks are ready for a night on the town. For the score Balanchine commissioned American composer Hershy Kay, who orchestrated a symphony in four movements inspired by popular folk tunes, including Red River Valley, The Gal I Left Behind Me and Goodnight, Ladies.

But despite its western atmosphere, Western Symphony is, in essence, a classical ballet. Rooted in traditional ballet vocabulary, the choreography alludes to the formations and gestures of American folk dance with playful twists on classic steps. According to Kay, Balanchine commissioned the score following a visit to Wyoming, and many recall his fascination for American themes and penchant for plaid shirts and western wear in his everyday wardrobe.

“I have crossed the United States by car some dozen times, have camped in the open air in New Mexico and Wyoming, in Montana and South Dakota. The vast sweep of the land, the impression of the Rockies and the plains, on foot and on horseback, cannot fail to move any newcomer, particularly one who has fresh memories of Europe, most of which is closely settled and where there have been few empty natural spaces for thousands of years,” Balanchine, a Russian expat, wrote in Balanchine’s New Complete Stories of the Great Ballets.

Western Symphony premiered in 1954 at New York City Ballet. Among the original cast members was former PBT Artistic Director Patricia Wilde, who remembers the dancers shopping for makeshift costumes for opening night because of budget constraints.

It wasn’t until the work opened with resounding success that legendary designer Karinska created the costumes. At home and on tour, Wilde recalls encore after encore and standing ovations for the instant fan favorite.

The work doesn’t follow a narrative framework, but moves through a series of vignettes fueled by charismatic lead couples.  From flirtatious one-upmanship to romance and whimsy, Balanchine develops character and charm but is sure to “let dance be the star of the show.”

“It’s certainly a fantastic show of the variety of moods that you can get. Each movement is so totally different and yet still retains the western flavor throughout,” Wilde said.  “The first is kind of romantic, playful… like the beginning of a romance. The second movement is like she’s dreaming…And then comes the third movement and it’s, we’re off to the races…very bubbly and gay. And then of course (in the fourth movement), the favorite lady of the saloon…showing off and strutting…legs, legs, legs, kick those legs.”

The jubilant mood reaches a crescendo in the final movement as the full ensemble converges in a seemingly never-ending series of synchronized pirouettes. As the curtain lowers, the turns only continue until the scene is lost from the audience’s sight.

Experience it for yourself: PBT will perform Western Symphony as part of its October season opener: Mixed Repertory #1 featuring Balanchine’s Western Symphony, William Forsythe’s In the Middle, Somewhat Elevated and Jiří Kylián’s Sinfonietta. Single tickets open August 24. To save 20% on the best seats in the house, subscribe now by clicking here. Three-ballet packages start at just $78 and come with exclusive subscriber benefits.