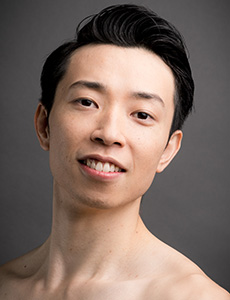 Yoshiaki Nakano, a native of Japan, joined Pittsburgh Ballet Theatre in 2010 and was promoted to principal in 2014. He received his early training at the Elite Ballet Studio in Osaka, Japan, and went on to train at San Francisco Ballet School and in PBT School’s Graduate Program. Yoshiaki won the gold medal at the 2013 Beijing International Ballet and Choreography Competition in China and the silver medal at the 2010 World Ballet Competition in Orlando, Florida. In 2014, Dance Magazine named Nakano among its top 25 Dancers to Watch.

Yoshiaki has performed the roles of Prince Siegfried in Swan Lake, Basilio in Don Quixote, Albrecht in Giselle, Prince Desiré and Blue Bird in The Sleeping Beauty, Solor and The Golden Idol in La Bayadère, Conrad and Ali in Le Corsaire, Romeo and Mercutio in Romeo and Juliet, the Nephew and Sugar Plum Cavalier in The Nutcracker, the White Rabbit in Alice in Wonderland and Tony in Jerome Robbins’ West Side Story Suite. He also has performed featured roles in George Balanchine’s Agon, Divertimento No.15, Rubies and Western Symphony; Twyla Tharp’s In The Upper Room and Nine Sinatra Songs; Jiří Kylián’s Petite Mort and Sinfonietta; William Forsythe’s In the Middle, Somewhat Elevated; and Jerome Robbins’ In the Night. PBT commissioned Nakano to choreograph two new works – A Fellow Feeling and Infusion – for its 2015-2016 and 2017-2018 mainstage seasons. He has also created works for PBT School, Point Park University and Tetsuya Kumakawa’s Gala in Tokyo.

Each summer, Nakano returns to Osaka, Japan, to choreograph and perform in the World Dream Gala in partnership with his mother’s Elite Ballet Studio, where he grew up dancing. He also teaches, performs and choreographs in several companies and studios in Japan.

This is Nakano’s tenth season with Pittsburgh Ballet Theatre and his sixth as a principal.