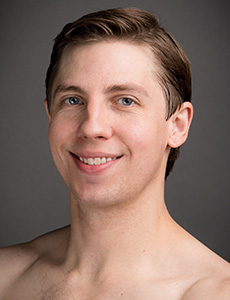 Joseph Parr grew up in Owensboro, Kentucky, and graduated high school in Wooster, Ohio. He received his training from University of Akron and Pittsburgh Ballet Theatre School and joined PBT in 2008. Some of his favorite performances include Twyla Tharp’s In the Upper Room, James Kudelka’s The Man in Black, Mark Morris’ Drink to Me Only With Thine Eyes and the roles of Jester in PBT’s Swan Lake, Toulouse-Lautrec in Jorden Morris’ Moulin Rouge® – The Ballet, the soldier in John Neumeier’s A Streetcar Named Desire, Renfield in Ben Stevenson’s Dracula, Dr. Coppelius in PBT’s Coppélia, Benvolio in Jean-Christophe Maillot’s Roméo et Juliette, and the Nephew in Terrence S. Orr’s The Nutcracker. He is also married to PBT dancer Diana Yohe.