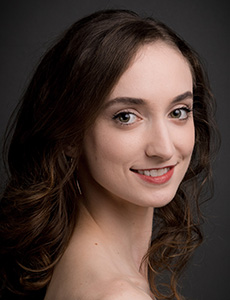 Jessica McCann joined Pittsburgh Ballet Theatre in 2015 and was chosen for Pointe Magazine‘s top 10 “Stars of the Corps” in 2016. She then advanced to Soloist at PBT in 2020.

McCann grew up in her hometown of Los Angeles, California performing in all styles of dance and theatre. Her later training includes a year with Alonzo King LINES Ballet in San Francisco, and American Ballet Theatre in New York, before joining PBT’s Pre-Professional Program in 2013.

She has had the pleasure to perform in featured roles such as the Principal Couple in George Balanchine’s Rubies; the lead in William Forsythe’s In the Middle, Somewhat Elevated; Kitri in Don Quixote Grand pas de deux excerpt; Princess Florine in The Sleeping Beauty; Pas de Trois and Cygnets in Swan Lake; Peasant Pas de Deux and Zulma demi soloist in Giselle; Anita in West Side Story Suite and the First Girl in Fancy Free by Jerome Robbins; Dwight Rhoden’s Ava Maria; Spring Waters Pas de Deux; Flora in Susan Jaffe’s Dracula excerpt, and the Sugar Plum Fairy, Marie, Arabian and Snow Queen in Terrence Orr’s The Nutcracker.

McCann has guested outside of the U.S. in Japan and Bermuda, where she has both danced and choreographed. She was also asked to judge the World Dream Ballet Competition in Osaka, Japan in 2018.