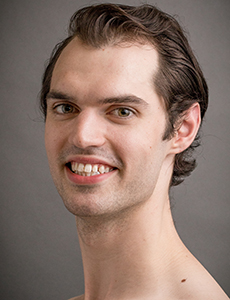 Jack Hawn received his early training near his hometown of Detroit, Michigan, and studied under Gregory M. George at the Children’s Ballet Theatre of Michigan and Sergey Rayevskiy at the Academy of Russian Classical Ballet. He joined the Pittsburgh Ballet Theatre School’s Pre-Professional Division under the direction of Marjorie Grundvig and Dennis Marshall in 2012, and has since performed in PBT productions such as The Sleeping Beauty, Le Corsaire, Romeo and Juliet, The Nutcracker, Alice in Wonderland and The Great Gatsby. In addition to dancing, Jack is an accompanist for PBT School, and has composed original music for two PBT School ballets: Dovetail and Gust.