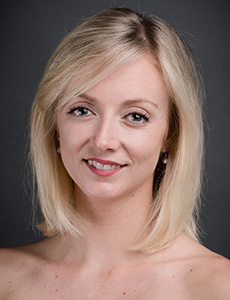 Hannah Carter of England joined Pittsburgh Ballet Theatre in 2013 after dancing as a corps de ballet member of the Estonian National Ballet. She graduated with honors from the Royal Ballet School in London and performed in a number of productions, including a tour to Spain, with The Royal Ballet. Hannah was promoted to PBT soloist in 2015 and to principal in 2016. Her repertoire with PBT includes Twyla Tharp’s In the Upper Room and Nine Sinatra Songs, Jiří Kylián’s Petit Mort and Sinfonietta, and William Forsythe’s In the Middle, Somewhat Elevated as well as classics, including Swan Lake, Don Quixote and The Nutcracker. Hannah has also performed leading roles in Le Corsaire, La Bayadère and Romeo and Juliet, among others.