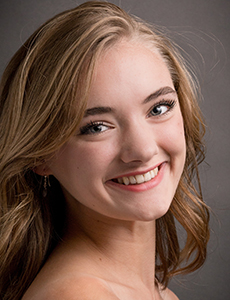 Grace Rookstool was born and raised on Whidbey Island, Washington. Her love of ballet began watching her older sisters dance at local studios on the island. She joined them at age 3, and began her classical ballet training at Pacific Northwest Ballet School in Seattle when she was 8 years old. She spent the next eight years in the Student Division and another two years completing the Professional Division Program. She has had the opportunity to dance with the company in many productions, including The Nutcracker, Swan Lake, The Sleeping Beauty and A Midsummer Night’s Dream. During her time in the PD Division, she was selected for an exchange program with Dresden Semperoper Ballett where she performed as a guest apprentice in La Bayadère.