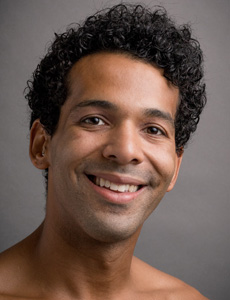 Corey Bourbonniere, a native of Woonsocket, Rhode Island, joined Pittsburgh Ballet Theatre in 2012. Before joining the company, Bourbonniere trained with the State Ballet of Rhode Island and Heritage Ballet in Rhode Island, as well as the Pittsburgh Ballet Theatre School Graduate Program. He also attended summer programs at the American Academy of Dance and Texas Ballet Theater. Corey received the honor of being named one of Pointe Magazine’s Standouts of 2018 for his portrayal of Bernardo in Jerome Robbins’s West Side Story Suite. He then went on to play the same role in Francesca Zambello’s full length West Side Story at the Glimmerglass Festival in Cooperstown, New York. Among his many PBT performances, Corey’s favorites include Jiří Kylián’s Petite Mort, as well as featured roles as a Stomper in Twyla Tharp’s In The Upper Room, the Third Sailor in Jerome Robbins’ Fancy Free, and Drosselmeyer in Terrence S. Orr’s The Nutcracker.